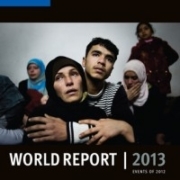 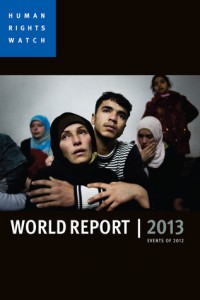 “The reports of the New York-based Human Rights Watch have become extremely important. . . .  Cogent and eminently practical, these reports have gone far beyond an account of human rights abuses. . . .”—Ahmed Rashid in The New York Review of Books

“An attempt to bring rationality where emotion tends to dominate.”—Simon Jenkins, former editor of The Times (London)

•An introduction by Human Rights Watch Executive Director Ken Roth on how the Arab Spring shows us that toppling dictators may yet prove to be easier than the tough, complicated process of building a rights-respecting democracy;
•An essay on a Human Rights Council resolution on “traditional values” sponsored by Russia, and the implicit dangers this could mean for LGBT rights;
•An essay on the failure of many global businesses to operate with sufficient regard to human rights, and of governments to oversee them—leading to abuses such as the use of forced labor on a Canadian construction site in Eritrea, or the gang rapes of women by security guards employed by an international mining giant in Papua New Guinea.

The Kurds in Turkey: EU Accession and Human Rights by Kerim Yıldız, Noam...