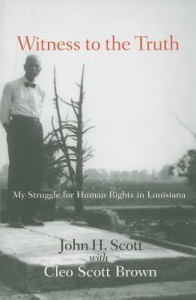 Witness to the Truth tells the extraordinary life story of a grassroots human rights leader and his courageous campaign to win the right to vote for the African Americans of Lake Providence, Louisiana. Born in 1901 in a small, almost all-black parish, John H. Scott grew up in a community where black businesses, schools, and neighborhoods thrived in isolation from the white population. The settlement appeared self-sufficient and independent-but all was not as it seemed. From Reconstruction until the 1960s, African Americans still were not allowed to register and vote. Scott, a minister and farmer, proceeded to redress this inequality. Ultimately convincing Attorney General Robert Kennedy to participate in his crusade, Scott led a twenty-five year struggle that graphically illustrates how persistent efforts by local citizens translated into a national movement.

Human Rights and Narrated Lives: The Ethics of Recognition by Kay Schaffer,...
Scroll to top