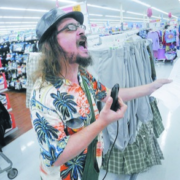 MR: What is Gonzo journalism and what does it mean to you personally?

KO’C: Hunter S. Thompson, author of “Fear & Loathing In Las Vegas,” and many other books, coined the term “gonzo journalism,” but the practice goes back much further. A great example of an early gonzo journalist is Nelly Bly, who had herself committed to a mental hospital in 1887 to expose the horrific treatment of patients. Ken Kesey is another famous practitioner, though what he practiced was a variation called “New Journalism.”
Gonzo journalism is journalism which rejects the idea of neutrality and objectivity. I consider myself an activist first and a journalist second, even though it’s the journalism that pays my bills and let’s me continue my activism. For me, journalism is a way to reveal important truths and try to share the knowledge that we need to build a better, more humane world.

What will the main matters of your new portal be?

I’ve been blogging at kitoconnell.com since 2008, but I’m beginning to post original writing on the site again. I’m focused on human rights, social justice, and overlooked stories based around marginalized groups of people. I’ve got a story I’m working on about a group of queer women who are building an art gallery in rural New Hampshire, and also hoping to investigate how homeless youth are being mistreated near the University of Texas at Austin. There’s a lot I’m interested in right now, but I think exploring the way people survive and suffer under late-stage capitalism is a common thread.
I’ve recently launched a mailing list, “Gonzo Notes,” which people can subscribe to for free (kitoconnell.com/mailinglist) and I’ve just launched a Patreon account (patreon.com/kitoconnell). I won’t have a full time job after January, so I’m really depending on my readers to support my work. I’m hoping to release as much of my writing as possible under a Creative Commons license, so it can be freely shared and reprinted.

How do you think gonzo journalism can promote alternative journalism?

Gonzo journalism is inherently a form of alternative journalism. I think one reason people seek out alternatives to the mainstream is they want to experience the news more immediately, as regular people like them experience it. There’s a clarity and a distance that traditional journalists maintain, and I think that has value, but a lot of readers also want the immediacy of gonzo journalism.
Protests are a perfect example of this. The TV news here in the US either ignores popular protest or depicts protesters as ineffective, messy, even dangerous rather than powerful. A gonzo journalist can bring the experience of being inside a protest, and help readers understand what’s provoking an uprising.

Why is objectivity not possible in journalism?

All journalists have bias. Bias is a part of the human condition. Traditional journalism generally denies that journalism and claims to be “objective.” But every journalist brings their own agenda to the story, and so does their editor, the publisher, and the sponsors and advertisers. Here in the United States, both MSNBC and Fox News, two of our largest TV news networks, claim to offer neutral journalism but they each are biased in one or another direction, generally toward the Democrats or the Republicans.
As a gonzo journalist, I lay my biases on the table. I generally say that I’m biased toward human rights and equality. I hope my readers know that I’ll always put people first, even when it’s inconvenient for a politician or a corporation. Especially when it’s inconvenient for a politician or a corporation.

How can perspectives of different journalists from different cultures and religions help to improve journalistic work?

We’re all human, but we each get a unique and diverse slice of that human experience. I’ve always tried to keep up with news sources from other parts of the world, like Canadian public radio or the BBC. It’s fascinating and illuminating to hear how even mainstream Canadian journalists talk about our president-elect. Of course, social media has opened up exciting new avenues of reaching other cultures. I love that I can follow a reporter from thousands of miles away.
And of course, in a way, smartphones turn everyone who can afford one into a citizen journalist. If someone witnesses breaking news, they just put up a livestream or jump onto Twitter. Some reporters might see that as a threat, but I see it as potentially incredibly liberating for humanity. It’s also a huge responsibility that maybe we’re not quite ready for, as a species.
How is the reaction of readers to Gonzo journalism?
I’ve definitely received some push back from people more comfortable with conventional journalism. However, as more people learn to recognize the bias in mainstream journalism, I think the demand for another kind of news is growing. And for every time I’ve had someone reject the kind of writing I favor, I’ve also had many more people, my interview subjects especially, tell me I’ve done a better job of bringing their stories to light than anyone else. There’s a lot of distrust toward the media right now, and I think being honest about our biases can be one way to rebuild that trust. I have a small, but rapidly growing following of people who rely on my voice and the unique stories I share.
I’ll close with a long Hunter Thompson quote I hope ProMosaik readers will appreciate:

“There are a lot of ways to practice the art of journalism, and one of them is to use your art like a hammer to destroy the right people — who are almost always your enemies, for one reason or another, and who usually deserve to be crippled, because they are wrong. This is a dangerous notion, and very few professional journalists will endorse it — calling it “vengeful” and “primitive” and “perverse” regardless of how often they might do the same thing themselves. “That kind of stuff is opinion,” they say, “and the reader is cheated if it’s not labelled as opinion.” Well, maybe so. Maybe Tom Paine cheated his readers and Mark Twain was a devious fraud with no morals at all who used journalism for his own foul ends. And maybe H. L. Mencken should have been locked up for trying to pass off his opinions on gullible readers and normal “objective journalism.” Mencken understood that politics — as used in journalism — was the art of controlling his environment, and he made no apologies for it. In my case, using what politely might be called “advocacy journalism,” I’ve used reporting as a weapon to affect political situations that bear down on my environment.”

Kira Sanbonmatsu – we need more women in politics to to represent women’s...
Scroll to top