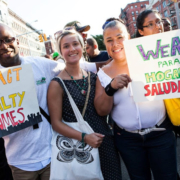 By Denise Nanni and Milena Rampoldi, ProMosaik. A challenging interview with Brooke Havlik, Director of Communications of the organisation WE ACT for environmental justice. Brooke explains us what environmental racism means, and how to struggle against it.  And one important point is the following: who pollutes, has to pay for the damage he created. Would like to thank Brooke for his time and important suggestions. 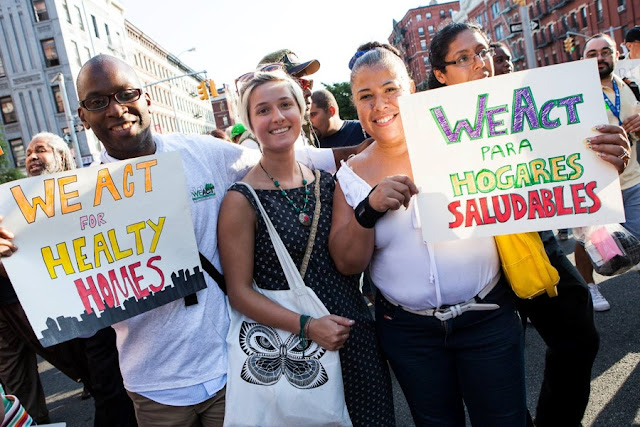 What is environmental racism and what are its sources?

In the late 1980’s, WE ACT for Environmental Justice’s co-founders fought back against a waste treatment plant that was polluting the local air and causing health problems in Harlem, a largely black neighborhood in NYC. A coalition of activists sued NYC’s Department of Environmental Protection (DEP) and eventually reached a settlement to reduce the problem.

While the situations or sources of pollution vary among local communities, the solutions are clear. To achieve environmental justice, polluters must pay for the damage they have created, and elected officials and governments must be held accountable for environmental equity measures such as stronger regulation, enforcement, community engagement and investment.

What are the main environmental issues in your areas of activity?

While WE ACT’s focus areas shift to respond to community needs and threats, currently our three major priorities are: 1) clean air, 2) climate change, and 3) healthy homes.

1.       Clean air: Communities of color have long endured living close to heavy polluters, such as power plants or highways in urban areas. Black, Asian, and Latino/a communities have some of the highest rates of asthma nationwide. In NYC, WE ACT fought for stringent bus pollution standards that led New York’s MTA to switch from diesel fuel to hybrid electrics that reduce tailpipe emissions by 95%.
2.      Climate change: The impacts of a changing climate will harm everyone, but it will have an unequal impact on communities of color because it is a threat multiplier, meaning it will layer upon existing health, economic, and racial injustices in the United States and around the world. Building community resilience is one way WE ACT is making change in NYC.
3.      Healthy homes: In New York City, low-quality housing stock means landlords do not always properly repair pre-existing housing deficiencies, such as cracks, mold, pests, and lead-based peeling paint within the home – all which can lead to high rates of childhood asthma or lead exposure and poisoning. We are leading a coalition to end preventable asthma-triggers across NYC and helped pass NYC’s Childhood Lead Poisoning Prevention Act (2004).

In what ways do you involve local communities in your actions?
WE ACT for Environmental Justice is first and foremost a grassroots organization with close ties to the Harlem community it resides in. We have a growing membership base made up of residents from Northern Manhattan, New York City, and supporters throughout the region. We particularly focus on organizing residents who live in New York City Public Housing Authority, or NYCHA. Through vast opportunities for community members to get involved in advocacy, planning, and research, WE ACT is able to mobilize low-income communities of color to make environmental change. Community members are currently working projects ranging from shared solar installations to climate emergency preparations.

In what ways do you advocate environmental justice?

We advocate for policy change and enforcement of environmental laws at a local, state, and federal level with the ultimate goal of healthy communities and expanded democratic participation among low-income residents and communities of color. Today, WE ACT’s federal office is the only environmental justice organization located in Washington, D.C.

Steve Valk of CCL – I’ve learned that I have a choice: I can be...
Scroll to top