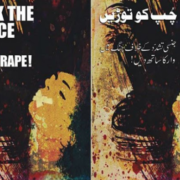 by Milena Rampoldi, ProMosaik. In the following my interview with Nabila Qureshey, Director of the GEP Project at War Against Rape (WAR) in Karachi, Pakistan. I talked to her about Islamic, women rights, and about how to struggle for a rape free society. Education and awareness-campaigns are the main arm we have at disposal to reduce and end rape in Muslim societies like Pakistan. We have to change our mentality as society. 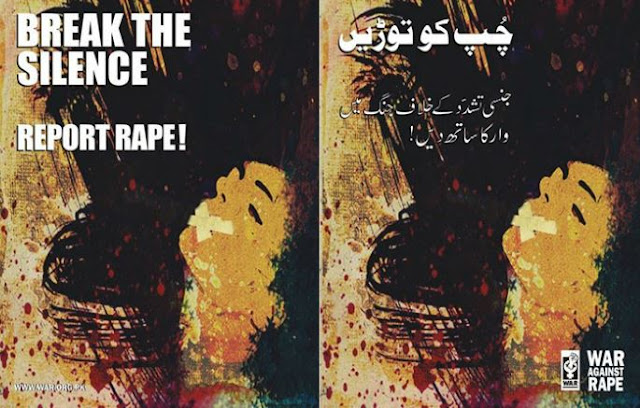 Milena Rampoldi: ProMosaik is convinced that Islam is a women-friendly society, and that in Muslim societies we need education to Islamic women rights. What do you think about it?
Nabila Qureshey: The most common stereotype associated with Islam is that it is a religion that suppresses and oppresses women. With all the bad press Islam gets people have developed the idea that it is somehow a male dominated religion that considers women as only objects and subjects that are under the control of a man.
Islam is a woman friendly religion and was one of the first to give rights to women, which they never had.
The West thinks that Islam does not allow women to pursue education. This is a misconception of women in Islam, because the religion preaches education for all and the pursuit of education is as imperative for a Muslim woman as it is for a man.
What is rape? Which are the forms of rape?
Rape is refers to forced sexual intercourse against a person’s will and/or against his/her consent. It is physically forced or otherwise coerced penetration – even if slight- of the vulva or anus, using a penis, other body parts or an object. It is a violent, hostile assault that a person commits to dominate, overpower and humiliate the aggressed. It is an act of exerting power and control.
The different forms of rape are: Rape, attempted rape, statuary rape, gang-rape, sexual Assault, sodomy, gang-sodomy, attempt to sodomy, incest, object rape and cyber rape. 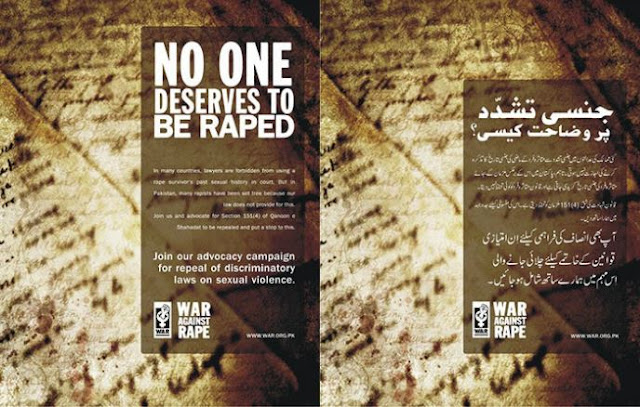 What is the main objective of War Against Rape?
War Against Rape is committed to work towards creating a rape free society. It endeavors to work on all social, legal, medical and administrative issues that could help either in the reduction of such acts of violence or support, facilitate and improve human rights and conditions for survivors.
Which are the main problems victims have?
Social Pressure on survivors and their families, biased, judgmental and discouraging behaviors of the police and medico-legal officers, lengthy, insensitive and snail-paced court proceedings and environment, patriarchal mindset of the society are the major hindrances/deterrents to provide speedy access to justice to survivors.
How to prevent rape?
Primary prevention through awareness-raising and capacity building at grassroots level with children, parents and the community in order to change their mindset.
Secondly, building capacities through changing behaviors and attitudes by educating key public and private stakeholders i.e. police, NGOs/CBOs, media, prosecutors, academicians, health practitioners including MLOs and relevant government departments while effectively handling and responding to survivors of SGBV.
Secondary intervention by engaging media and other relevant key stakeholders by effective implementation of laws to ensure speedy access to justice for survivors.

What have you achieved in your long activity, and what is your dream for the future?
WAR unequivocally and strongly advocated the complete repeal of the Hudood (purportedly religious interpretation based) Ordinances that were promulgated by the dictator General Zia-ul-Haq in 1979. These were heavily stacked against women especially those subjected to sexual violence, and extended undue benefits to the perpetrators. WAR has seen success in these all-out advocacy efforts along with ally NGOs in the form of the Criminal Laws Amendment (Protection of Women) Act, 2007 which dented the seemingly unmovable Hudood laws, specifically the one pertaining to rape. Rape was transferred back to the Pakistan Penal Code instead of being lumped together with ‘adultery’ as was the case with the Hudood ordinances. WAR has also worked continually to make the courts more sympathetic to women and advocated for in-camera hearings, where requested by the survivor, so as to minimize the trauma to victims. Some survivors prefer to fight their legal battle in open courts; WAR respects their stand as well.
Furthermore, break the silence, passage of Anti-rape laws (Criminal Laws Amendment) Bill, 2016 have also been the major achievements of WAR.
WAR is currently lobbying for the effective implementation of the Anti-rape Bill, 2016  as well as adoption of the Medico-legal Policy Brief – Standardized Protocols for the advance care and protection of the survivors of SGBV.
Our dream is to create a society where women, children and minorities are aware of their rights and are able to exert them accordingly without fear of persecution from their communities and where the State takes responsibility of the welfare of its people.

FHI 360 – Everything is connected