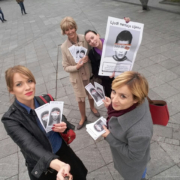 By Denise Nanni and Milena Rampoldi, ProMosaik. In the following our interview with Aleksandra of the organisation United Women in Banja Luka. We asked her about the objectives of her organisation and which gender-related issues her country has to face. The main problem is that gender based violence remains widespread and socially tolerated throughout the region. Would like to thank Aleksandra for her answers and photos. 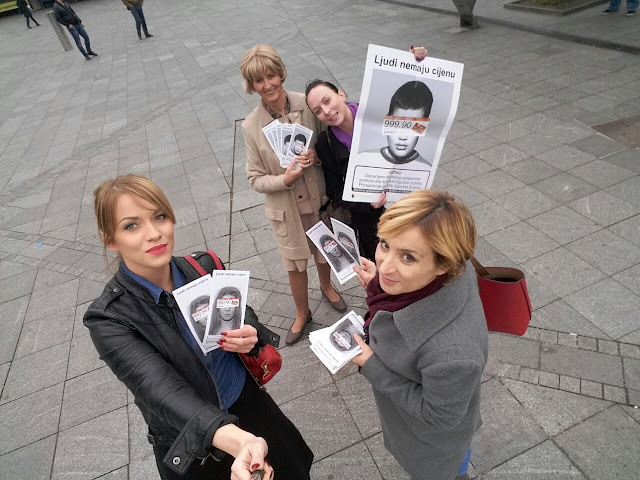 What are the main gender-related issues in Bosnia and Herzegovina?

Lack of women at decision making positions – although Bosnia and Herzegovina adopted the Gender Equality Law that regulates quota of 40% of women at election lists, women are still under represented at all levels of governance, and space for women in political decision making and governance is shrinking after each elections.  Violence against women – although BiH institutions adopted legislative framework that incriminates domestic violence, and other forms of gender based violence, and adopted public policy documents that focus on prevention and combating VAW, we still high prevalence and widespread social tolerance for domestic violence, that often ends with murders of women in a family. Violence against women often goes underreported, due to lack of sensitivity of key institutional subjects of protection (police and centers for social work) that fail to react, or react inadequately on requests for assistance coming from women survivors.
What are the activities of United Women?
We are working in two strategic directions – prevention and fighting violence against women and advancing participation and influence of women at decision making positions. We provide gender sensitive services for women survivors of violence, including free legal assistance, SOS telephone counseling, and have shelter/safe house for women and children victims of violence. We advocate for changes and adoptions of public policies related to women’s human rights and gender equality, and work closely with women in parliaments at all levels in Bosnia and Herzegovina, to advance public policies and laws affecting lives of women. United Women Banja Luka is continuously organizing organize public advocacy campaigns, and work on increasing public visibility of women’s issues, engaging wide population to contribute to prevention and fighting violence against women. Gender based violence prevention includes work with schools through workshops targeting students and school personnel on gender equality and fighting gender based violence.  United Women Banja Luka actively cooperates with women’s NGOs across the country on numerous actions/activities aimed at fighting gender based violence, and advancing women’s participation in decision making and peace building. We also network and work together on prevention and combating gender based violence at the regional level, with the Autonomous Women’s Center from Belgrade (Serbia), Center for Women Victims of War Rosa from Zagreb (Croatia), Gender Equality Council from Skopje (Macedonia), SOS Telephone for Women and Children Ljubljana (Slovenia), Women’s Center from Podgorica (Montenegro). Together we worked on the regional initiative of advocating for ratification and implementation of the Council of Europe Convention on Prevention and Combating Violence Against Women and Domestic Violence (Istanbul Convention), which Bosnia and Herzegovina ratified in 2013.  United Women is also a member of VAWE Network (Women Against Violence in Europe), and contributes in exchanges of practices and campaigning against gender violence. 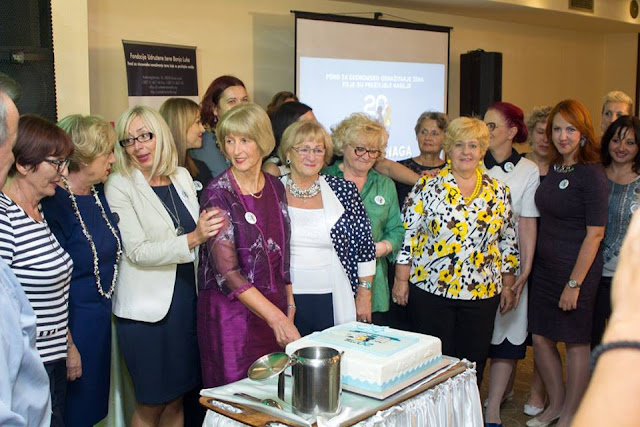 How extended is gender-based violence and how do you address this issue?
As we explained above, gender based violence remains widespread and socially tolerated throughout the region, as well in Bosnia and Herzegovina. Official statistics are not harmonized and collected regularly, and due to that, it is difficult to speak about prevalence in exact figures. For example, in 2013, the Agency for Gender Equality of Bosnia and Herzegovina coordinated the first countrywide study on prevalence and characteristics of violence against women in BiH. According to research findings, more than half of the women surveyed (47.2% in BiH, 47.2% in the Federation BiH and the Republic of Srpska, 47.3%) experienced at least one form of violence from the age of 15. Perpetrators of violence against women are most often former or current partners. Research findings show that partner violence is evident in 71.5% of cases. In general, there is a much higher risk of violence against women in intimate partner and domestic relationships that in the wider community. Young women are more exposed to violence than older women (the prevalence rate of violence among women aged 18-24 is 56.38% and 44.2% in the case of women over 65 years) Data on the frequency of violence indicates that occurrences of violence are not individual incidents, but that these practices are systematically repeated.[1]
Gender based violence exists within all spheres of social life in BiH, and it is closely linked with patriarchal background of our society, strong influence of religious communities on entire social context of postwar society. Gender equality and women’s human rights issues are marginalized topics. Throughout 20 years of work, United Women Banja Luka built gender sensitive services for women in need, as we said through free legal assistance, SOS telephone, and Safe House. We are continuously engaged in public advocacy for improving legal and public policy protection through participating in developing legislation, submitting amendments, and also monitoring work of judicial institutions (courts and prosecutors) to influence on better protection of women and children survivors that are participating as witnesses in court proceedings, among other activities. 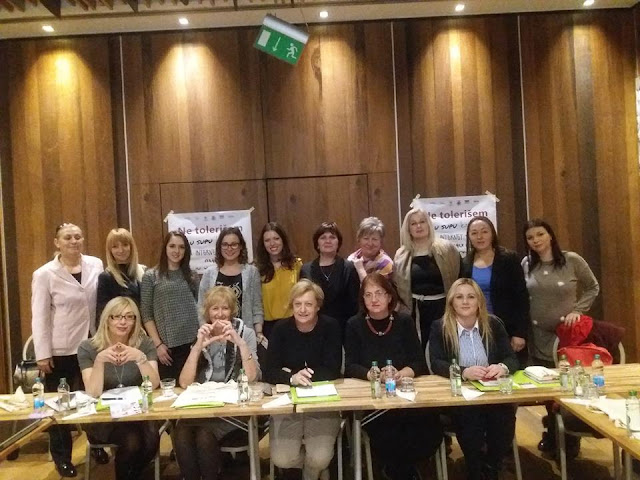 How do you advocate women’s participation in politics?

Foundation United Women Banja Luka recognized women in decision making as important allies in working on improving women’s human rights in practice, and we continuously work with women parliamentarians to advocate together for improving protection of women’s human rights in the practice. We were part of the countrywide coalition of women’s NGOs that successfully advocated for introducing women’s quota in the Election Law of Bosnia and Herzegovina, and support women’s participation in the election process through public advocacy during pre-election campaigns, emphasizing importance of women’s representation in political decision making regardless of political option. In 2010, we initiated the Program Platform of cooperation of women NGO activists and women parliamentarians at state, entity, and Brcko District level, within which we defined common advocacy priorities, and discuss concrete actions to advocate for better implementation of laws and policies in this field. United Women also continuously work with women in political parties, to raise their capacities to engage in political life, advocacy and media communication skills, and also focus on young women politicians, to encourage them to actively engage in politics, and advocate for improving women’s rights and gender equality in the practice.

We do cooperate with local authorities and institutions through joint agreements, memorandums of understandings, teams for assistance and support to women and children victims of domestic violence. United Women Banja Luka lobbied for Domestic Violence Law in Republika Srpska to recognize obligation of planning and allocating financial support for the safe houses from the public budgets, so City Administration Banja Luka contributes following this legal obligation, and resources are also partially allocated through the public budget of Republika Srpska. This is important, as we believe that violence against women and children is the public issue, and that authorities at all level in BiH have to take responsibility for assisting women and children that are predominantly affected by  domestic violence. United Women Banja Luka also contributes as a member of the multi-disciplinary working groups on developing legislative framework for gender equality and women’s human rights. 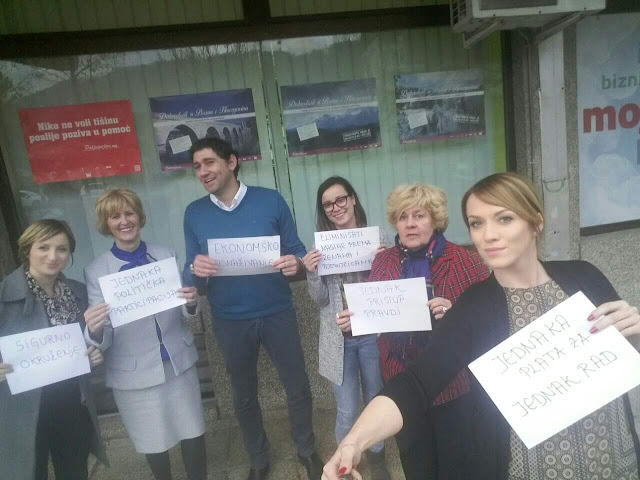 Walta Ethiopia – against the feminisation of poverty

Light for the World – combating preventable blindness
Scroll to top