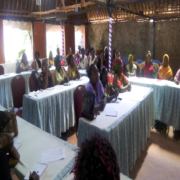 By Denise Nanni and Milena Rampoldi, ProMosaik. In the following our interview with Titus Kaloki of the FriedrichEbert Stiftung in Nairobi Kenya. We would like to thank him for his time and the photos he sent us. We talked about the social and political problems in Kenya, about youth and women empowerment and about how to improve political participation of the civil society. 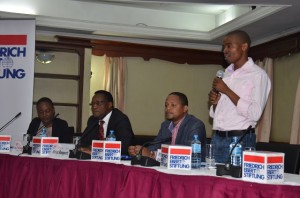 (Far left): Majala Mlagui, Director Thamani Trust. (Second Left) Hon. Prof. Jacob Kaimenyi, Cabinet Secretary Ministry of Lands and Physical Planning. (Second Right) Titus Kaloki, Programme Coordinator FES Kenya. (Far Right) Christopher Mwambingu, Director Taita Resource Center during a National conference on Land and Mining rights held on 18th Dec 2016.
With what aims was founded FES in Kenya?
FES was founded in Germany in 1925 and opened the Kenyan office in 1964. In 1964, the first Resident Representative was sent to Nairobi to open an office from which all further activities would be coordinated. In May 1972, the official agreement between the Government of Kenya and FES was signed. FES is aimed at strengthening democracy and improving political, social and economic conditions for development. The Foundation does this through capacity building, policy development and promotion of dialogue on contemporary issues among diverse groups.
FES is involved in strengthening institutions and mechanisms that are key to a vibrant democracy, such as an independent Parliament and a strong civil society, as well as trade unions. FES also promotes public debate on topical political issues and the freedom of the media.
What are the main social issues in Kenya?
Kenya has bad governance related problems such as tribalism, corruption and underdevelopment. The Kenyan politics are characterized by ethnic mobilization which tends to put aside serious debate on issues affecting citizens and sometimes leads to violence in election related disputes. Since this kind of politics require each tribe to have a tribal kingpin based on a patriarchal cultural system there is little democratic space within a tribe. Leaders are elected through endorsement by tribal kingpins who act as community gatekeepers. These tribal elites monopolize political and economic power which fosters commercialization of politics since wealth and power can only be generated through the hands of a few elites.
Most Kenyans then vote for whoever can give handouts or promise community centered economic benefits. For the leaders to amass enough wealth to please their communities they must turn to embezzling of public coffers leading to corruption and massive failure of development projects. The national and county governments led by this type of leaders have little or no incentive to empower their communities since it requires relinquishing the monopoly on economic and political power. Democracy is thus hindered and citizens remain largely unaware of their rights and how to exercise them. At the end Kenya remains underdeveloped both democratically and socio-economically. 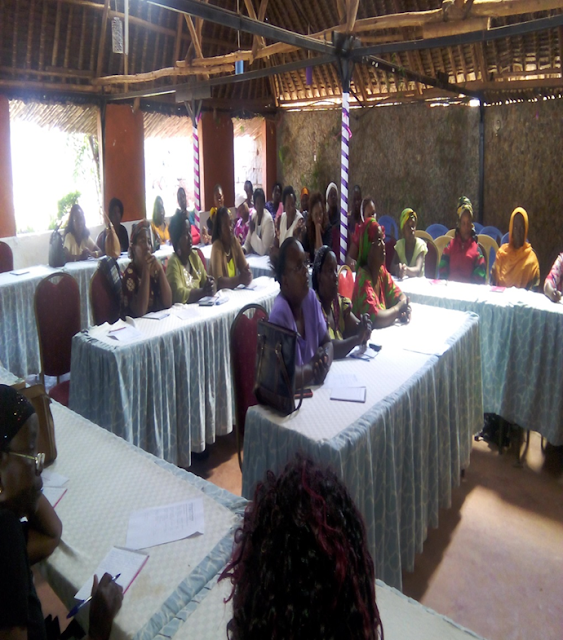 Women grassroots leaders listen during a workshop on women participation in political leadership in Taita Taveta County facilitated by FES Kenya in August 2016.
In what ways do you promote women’s participation in governance and politics?
The Kenyan constitution advocates for the affirmative action for women in all leadership and governance position. It requires a minimum of 30% of either gender to be appointed in such positions. Therefore as FES we adhere to this constitutional requirement as a minimum in participants’ composition. We also partner with local organization whom we facilitate to implement projects aimed at empowering women in political leadership and governance.
What are the main obstacles to women and youth empowerment?
The patriarchal culture of many Kenyan tribes doesn’t provide opportunity for the youth and women voices to be heard. Even when these women and youth are educated and have brilliant ideas they have to adhere to instructions from lesser educated older men. This is fostered by the politics of the day where elders influence communities to vote for tribal representatives who are also exclusively men. These tribal style of politics monopolizes economic and political power in the hands of the tribal male elites. So for the women and youth who have aspirations to empower themselves politically and economically, they have to compromise their values at some point and get entrenched into the existing system.
Another obstacle is the lack of youth and women friendly representation in many decision making organs of both government and general society. Whenever these two groups get a chance it is pegged on affirmative action instead of empowering them to be equal players. Therefore, they get nomination slots that are ceremonial in nature and controlled by men.
Unemployment and lack of access to credit facilities has subjugated women and youth to beggar status under the mercy of men. They cannot hold strong opinions and self-organize to demand their rights or participation in governance since it is easy for men to infiltrate them by enticing a few to sabotage the process through either coercion or bribery.
Do you cooperate with local authorities and institutions? If yes, how?
We do work with local partners drawn from the Non-Governmental Organizations and Community Based Organizations. We facilitate their programs on good governance. It is through these organizations that linkages and partnerships may be formed with local authorities and government institutions. An example would be our public participation programs which bring together citizens, civil society organizations and county governments to discuss the challenges, successes and future plans in public participations. In some instances we have succeeded in lobbying for legislative processes that empower public participation such as the Kisumu Public Participation Act. 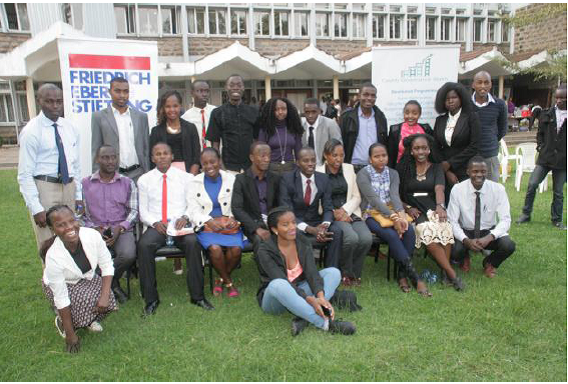 University students pose after a workshop on Youth participation in the 2017 elections held in July 2016.

Kuwangisana Project in Mozambique – struggling for a better health and against...
Scroll to top