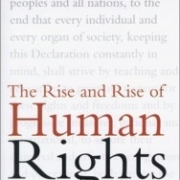 This text argues that global politics today is dominated by a single idea: human rights. It investigates the evolution of this ideal, and reveals a political history played out by presidents and foreign ministers, diplomats and prosecutors, journalists and advocates. Using previously unpublished archival material, this book traces the story of international human rights from World War II to the conflicts in Kosovo and Afghanistan. The book exposes the self-interest and cold-war rivalry that characterized negotiations over the UN’s Universal Declaration and the human-rights covenants. Using new material from the United States, Britain and France, the author argues that the human-rights crusade has been designed primarily to enhance the West’s self-image and to court domestic public opinion. As a consequence, it has aided its powerful Western advocates rather than its supposed beneficiaries in the broken and war-torn nations of the world.

Human Rights and the Image of God by Roger Ruston