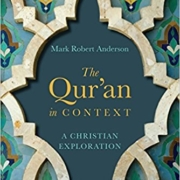 For most Westerners, the Qur’an is a deeply foreign book. Christians who venture within this sacred scripture of Islam encounter a world where echoes of biblical figures and themes resound. But the Qur’an speaks in accents and forms that defy our expectations. For it captures an oral recitation of an open-ended drama, one rooted in seventh-century Arabia. Its context of people, events and ideas strikes us not only as poetically allusive but as enigmatic. And yet the Qur’an and its contested interpretations scroll in shadowed text between the headlines of our daily news. In The Qur’an in Context Mark Anderson offers a gateway into the original world and worldview of the Qur’an. With keen attention to the Qur’an’s character, reception and theology, he opens up a hermeneutical space for Christians and others to engage its fabric of religious claims. The Qur’an’s theology, anthropology, soteriology, spirituality as well as its portrayal of Jesus are all carefully examined. Finally, the Qur’an’s claim to be the Bible’s sequel is probed and evaluated. Forthright in Christian conviction and yet sympathetically open to dialogue, The Qur’an in Context is a reliable guide for those who want to explore the holy book of Islam in its varied facets.

Evolution and Religion: A Dialogue (New Dialogues in Philosophy)