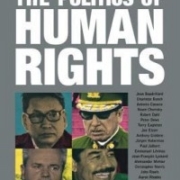 This volume sets out to describe the political and philosophical underpinnings of the idea of human rights by bringing together a collection of original essays by a group of highly distinguished theorists. Recognizing that Western insistence on the universality of the concept of human rights can also function as a diplomatic cover for post-colonial interventions, it insists that the campaign for human rights must take into account the varied social and economic environments in different nation states that affect the ways such demands can be implemented. This campaign is most effective when demonstrating international solidarity with those whose basic rights are jeopardized or denied.