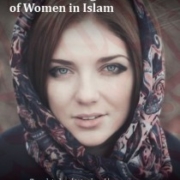 With this adaptation of the aphorism to Women in general, and Muslim Women in particular, Dr. Rampoldi wants to show how the UNRIGHTS of WOMEN we find today in Islam are not Islamic, but part of a tradition of exclusion and segregation which started in Muslim history to ban women from social and political activism.

Why is al-Ansari’s essay so important for as us politically engaged Muslim women?

Prof. al-Ansari presents three different views on the participation of women in politics and society: from the total exclusion of women from politics by ultra-traditional Muslims, who state that if a woman is not responsible for the financial matters in the household, she cannot rule a State, to a partial and an almost complete participation of Muslim women in political and social life in an Islamic State. About these three views Dr. Rampoldi writes:

“I am convinced that these three views essentially represent the entire Muslim community and that this division can help to improve the dialogue between these three different groups if they learn to respect one another and start understanding that all three points of view are respectable within Islam”. If we approach the matter in a way next to the Enlightment Philosophy we will be able to achieve a positive dialogue within Islam concerning political rights of women. According to the Quranic Verse 5:48, Islam is a religion which supports diversity, and open-minded discussion about all religious, social and political matters. This is the contribution Islam can make to dialogue and acceptance of diversity today, to leave the culture of HATRED as Prof. al-Ansari calls it, in order to achieve a world made of justice and peace. Political rights of women are an important aspect of this peaceful and just world, accepting diversity: and diversity means gender, cultural, social, and political diversity. We of the association ProMosaik are convinced that the message of a colourful world made of tolerance is also the core message of Islam if we understand it properly. And gender justice is part of this correct interpretation of Islam according to Quran and Sunna.

If you would like to help the association ProMosaik and its research about women’s rights in Islam, please follow this link to purchase of copy of this book: