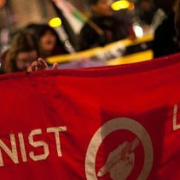 By Milena Rampoldi, ProMosaik. In the following my interview with Sarah O’Mahoney -Admin worker and Lorna Harrington – volunteer for the Bookshop and events of the Feminist Library in London. I asked them questions about feminism and about the Feminist Library existing since 1975. Would like to thank them for their precious inputs about the importance of feminist history, and feminist struggle.

Milena Rampoldi: What does feminism mean to you?
Sarah O’Mahoney: Feminism is about equality and letting women voices be heard. Balancing out the patriarchal nature of the world as it is at the moment.
Lorna Harrington: Being a feminist to me is about having confidence and not seeing being a woman as a barrier or weakness to what I want to do but rather a strength and something to be celebrated. Certainly my time volunteering at the feminist library has helped by self esteem and made me feel valued as a woman.
Milena Rampoldi: ProMosaik thinks that feminism is to be seen a feminisms, because every culture and religion has its own way of considering feminist struggle. What do you think about it?
Sarah O’Mahoney: O I think there are different levels of struggle depending on the situation/country/work/class/race of individual women but the underlying theme is the same- equality and respect and peace for all.
Milena Rampoldi: What is the main objective of Feminist Library?
Lorna Harrington: In my opinion, other than preserving feminist history through books and other publications, the feminist  library is a safe place where women can be themselves without the judgement, stereotypes and stigmas associated with being a feminist or even just being a woman! From personal experience it is also a great place to meet like minded women in real life.
Milena Rampoldi: Tell us about the most important steps of the history of your Library.
Sarah O’Mahoney: The Feminist Library was founded as the Women’s Research and Resources Centre in 1975 by a group of women concerned about the future of the Fawcett Library to ensure that the history of the women’s liberation movement survived. The founders included feminist academics like Diana Leonard and Leonore Davidoff.
The library started out as a small collection of contemporary material, but is now considered to be most significant library of feminist material in England, containing some 7500 books, of which around 5000 are non-fiction, 500 poetry publications, and 1500 periodical titles, many self-published, spanning over about 85 metres of shelving.There is also a large number of pamphlets, currently held at the Bishopsgate Institute.[4]
2003 crisis
The library faced a financial crisis in 2003 when Lambeth Council dramatically increased the rent on the building housing the collections.[5]
Four years later, in 2007, the management committee called an emergency meeting as a final attempt to gather support. Fortunately, the meeting was well attended and the library was saved, although it still struggles today, depending on grants to survive. Opening hours have increased in 2013 – 2014 but are still dependent on the availability of volunteers.
Librarians for Tomorrow]
In January 2010, the library announced that it had received a grant from Awards for All,[6] which it intended to use to train volunteers in radical librarianship, using the library itself as a resource. In March 2010, fifteen volunteers were chosen from many applicants and they began working at the library in April 2010. One of the trainees is writing an anonymous blog about her experiences.[7]
FUTURE:
Earlier in 2016 we were again in crisis as we were again threatened with a rent increase and faced eviction.
However due to a very successful Save The Feminist Library campaign and much appreciated support from all around the world we have now negotiated with Southwark Council to remain in the building until new premises are ready for us to move into next year.
Milena Rampoldi: How can people support your Library?
Lorna Harrington: From my point of view, coming and visiting the library and using the space, for whatever reason is imperative. Obviously donating and volunteering is just as important but as a volunteer it is always great to have people popping in. After all it’s not just a library it is a community space so it’s always good to see people making use of our fabulous resource. I particularly like how the library has a laid back feel so anyone who feels intimidated by academic or public libraries can be assured they will received a warm welcome here.
Milena Rampoldi: How important is an intercultural perspective in Feminism today in our multi-cultural world?
Lorna Harrington: I think this is really important, as it is through the coming together of feminists from different cultures that we  can learn a lot not only about others but also ourselves. Being able to share our stories with like minded people, gives us strength and hope through our feminist struggles. As women are often silenced in society, particularly those from minority groups, it is vital that we as feminists come together and support each other.
Milena Rampoldi: What are the objectives of Feminist Library for the near future?
Sarah O’Mahoney: We want to continue offering an accessible space for women to come and use and to grow our collection pulling on all the amazing new writings and self made zines that women and girls are producing today. We hope to do more outreach work in schools and colleges and offer more empowering workshops and events that inspire and encourage women to campaign for what is important to them and to let their voices be heard. The world needs us all to be heard.

Women on Waves – Abortion right as an expression of gender justice

Accountability Cambodia – Promotion of Democracy and Integrity
Scroll to top