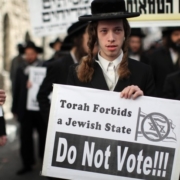 here you can find the declaration of the orthodox Jewish group of Neturei Karta… this group does not accept the State of Israel as it is a ZIONIST STATE which is the opposite of real Judaism. In the following you will understand their thoughts, and understand their WHY….

and their motivations are clear and rational. Please send us your comments about the article to info@promosaik.com

WHY ORTHODOX JEWS ARE OPPOSED TO A ZIONIST STATE

The People of Israel oppose the so-called “State of Israel” for four reasons:

SECOND — Because of all of this and other reasons the Torah forbids us to end the exile and establish a state and army until the Holy One, blessed He, in His Glory and Essence will redeem us. This is forbidden even if the state is conducted according to the law of the Torah because arising from the exile itself is forbidden, and we are required to remain under the rule of the nations of the world, as is explained in the book VAYOEL MOSHE. If we transgress this injunction, He will bring upon us (may we be spared) terrible punishment.

THIRD — Aside from arising from exile, all the deeds of the Zionists are diametrically opposed to the Faith and the Torah. Because the foundation of the Faith and Torah of Israel is that the Torah was revealed from heaven, and there is reward for those who obey it and punishment for those who transgress it. The entire People of Israel is required to obey the Torah, and whoever doesn’t want to, ceases to be part of the congregation of Israel.

FOURTH — Aside from the fact that they themselves do not obey the Torah they do everything they can to prevent anyone they get under their power from fulfilling the commands of the Torah, the claims to freedom of religion are lies. They fight with all of their strength to destroy the Faith of Israel.

The Zionists claim that they are the saviors of Israel, but this is refuted by twelve things:

FIRST — If one contemplates the two thousand years of our exile, take any hundred years even the hardest, one will not find as much suffering, bloodshed, and catastrophes for the People of Israel in the period of the Zionists, and it is known that most of the suffering of this century was caused by the Zionists, as our Rabbis warned us would be the case.

SECOND — It is openly stated in books written by the founders of Zionism that the means by which they planned to establish a state was by instigating anti-Semitism, and undermining the security of the Jews in all the lands of the world, until they would be forced to flee to their state. And thus they did – They intentionally infuriated the German people and fanned the flames of Nazi hatred, and they helped the Nazis, with trickery and deceit, to take whole Jewish communities off to the concentration camps, and the Zionists themselves admit this. (See the books Perfidy, Min Hameitzor, etc.). The Zionists continue to practice this strategy today. They incite anti-Semitism and then they present themselves as the “saviors”. Here are two replies given by Leaders of the Zionists during World War II, when they were asked for money to help ransom Jews from the Nazis. Greenbaum said “One cow in Palestine is worth more than all the Jews in Poland.” (G-d forbid).
Weitzman said, “The most important part of the Jewish people is already in the land (of Israel) and those who are left, are unimportant” (May we be spared).

THIRD — We see that most of world Jewry lives in security and under good physical conditions, and have no desire to go live in the Zionist State. Whereas many people have left the Zionist State to live under better conditions in other lands.

FOURTH — The Zionists make a great deal of propaganda to induce people to immigrate to their state. If their state is so beneficial why do they have to make so much propaganda.

FIFTH — Because nobody wants the Zionists to “save” them. The only way they can get immigrants is by promising poor people material benefits, and even then very few people respond.

SIXTH — The Zionist State is always threatened by the dangers of war. Whereas the rest of world Jewry live in peace and security, (Except in a few places where the Zionists have undermined their security and fanned the flames of hatred)

EIGHTH — The Zionist State is on the verge of economic collapse, and their money is nearly worthless.

NINTH — The Zionist State persecute all Jews who are loyal to their Faith.

TENTH — They start wars that endanger the Jewish People, for the sake of their own political interests.

ELEVENTH – According to the Torah the path of safety is following ways of peace not starting fights with other nations, as the Zionists do.

TWELFTH — Even if the Zionists could and would provide physical security it would be at the expense of our Faith and Our Torah the true People of Israel prefer death rather than life at such a cost.

It is therefore clear that Zionism is not the savior of the people of Israel. Rather it is their greatest misfortune.

Even though there are some observant Jews and rabbis, who approve of the Zionists, this is not the opinion of the Torah.

The Zionists have enough control over the American news media to make sure that only their side of the story is heard.

They make it look like all Jewry and their rabbis are Zionists, but this is false propaganda.

The most important Rabbis and the majority of religious Jewry are opposed to Zionism, but their voice is not heard because of Zionist control of American news media.

The Zionists terrorize everyone who speaks out against them.

That part of the Jewish masses which is fooled by Zionist propaganda puts pressure on their Rabbis not to speak out.

Between the terror and the pressure of the masses most of the Rabbis are prevented from speaking out.

We bring three testimonies of the true opinion of the Torah.

1) In the past two thousand years of the dangers and sufferings of exile not once did any of the Sages of Israel suggest that we make a state to protect ourselves. In every generation we had thousands of Sages well versed in the Torah.

2) We have thousands of legal work of Torah law that have been handed down to us by the Sages of all generations. Not once do we see a word suggesting the establishment of a state. What we do find is warnings against it.

3) The founders of Zionism were all atheists who denied the Torah. All the Torah Sages of that time opposed them and opposed Zionism, saying that Zionism would lead only to destruction.

However the true People of Israel will never change their nature or give up their Faith because of the strength the Creator gives them.

Zionism has overcome the Jewish people by force, fraud and terror, but none of this will help them because the truth will always remain with the help of the Creator.

Let the truth be declared. The use of the Name “ISRAEL” by that State is a complete falsification. The People of Israel have nothing to do with that State. Zionism and its State have no share and no part in the true ISRAEL.