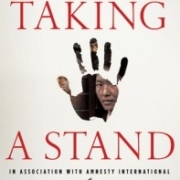 Juan Méndez has experienced human rights abuse first hand. As a result of his work with political prisoners in the late 1970s, the Argentinean military dictatorship arrested, tortured, and held him for more than a year. During that time, Amnesty International adopted him as a “Prisoner of Conscience.” After his release, he moved to the United States and continued his lifelong fight for the rights of others, and the lessons he has gleaned over the decades can help us with our current struggles.  Here, he sets forth an authoritative and incisive examination of torture, detention, exile, armed conflict, and genocide, whose urgency is even greater in the wake of America’s recent disastrous policies. Méndez offers a new strategy for holding governments accountable for their actions, providing an essential blueprint for different human rights groups to be able to work together to effect change.

A World Made New: Eleanor Roosevelt and the Universal Declaration of Human Rights...
Scroll to top