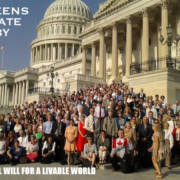 By Denise Nanni and Milena Rampoldi, ProMosaik. In the following our interview with Steve Valk of CCL about climate change. The general idea of CCL is the following: Citizens’ Climate Lobby creates the political will for a livable world. We empower individuals to experience breakthroughs exercising their personal and political power. 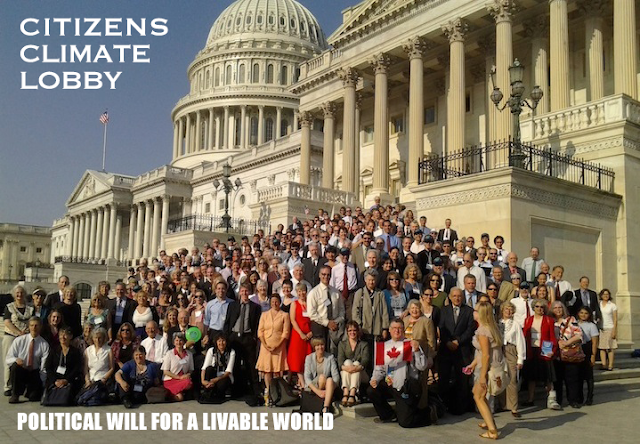 What are the strategies used by CCL in order to address climate change?
We believe the most important tool to fight climate change is an effective price on carbon, which must be implemented at the national level. Therefore, we lobby the U.S. Congress for a policy known as Carbon Fee and Dividend — a steadily-rising fee on the CO2 content that fuels emit when burned with the revenue from that fee returned equally to all households.
In order to get this legislation introduced and moving in Congress, we train and support volunteers all across the U.S. to be effective advocates with their members of Congress. We’ve grown from a dozen U.S. chapters in 2010 to more than 300 now.
With Republicans controlling Congress, it is essential that we work with Republicans to gain support for this solution and to bring them to the table. We achieved a major breakthrough last year when we helped to establish the bipartisan House Climate Solutions Caucus, creating a safe space for Republicans and Democrats to find common ground for climate solutions.
How important are capacity building and media coverage in your activities?
Capacity building is critical. The more chapters we have, the more congressional districts we can cover with constituents communicating with their members of Congress. As we recruit more volunteers, we increase our effectiveness with the various levers of political will — letters and phone calls to Congress, endorsements from community leaders, published media.
Media coverage is very important, but our volunteers generate their own media by publishing thousands of letters to the editor each year and hundreds of op-eds. They make sure, then, that this published media reaches the offices of their representatives and senators, who view this as a show of support in their districts for action on climate change.
What important actions have been undertaken during your years of activity?
I’ve been with CCL since we first started hiring staff in 2009, so there’s quite a lot that’s happened. We held our first national conference in Washington, DC, in June of 2010, which was attended by 25. At our last national conference in June of 2016, we had close to 1,000 people attending, and our volunteers held 502 meetings with congressional offices.
We’ve established a system of support for our volunteers to help them go from being a clicktivist to being effective citizen lobbyists. This has entailed launching hundreds of chapters with our volunteers receiving a three-hour climate advocate training. Our groups meet once a month, during which they connect to a national call with our executive director and a special guest each month who educates our members about a particular aspect of the climate issue — science, economics, politics,communication.
Each chapter has a group leader who receives support from a regional coordinator and from a weekly call for group leaders.
Our volunteers conducted 282 face-to-face meetings with their members of Congress in 2016, and held 1,109 meetings with congressional staff.
In 2010, we published 36 letters to the editor. In 2016 we published 2,480 letters to the editor and 391 op-eds.
As mentioned above, we played a pivotal role in the establishment of the bipartisan House Climate Solutions Caucus.
Last year, we launched the endorsers project to get endorsements for our carbon pricing policy from community leaders, businesses and governmental bodies. A listing of state, county and city resolutions that have been generated can be found here.
In what ways do you promote society capacity building and how do you raise awareness about environmental issues?
Our volunteers do outreach in their communities by leading presentations before various groups and faith communities.
Feel free to add something you would like to tell to our readers.
Please feel free to add anything that you may want to say. I’d be glad to receive a couple of pictures, to be published along with the interview. I will send you the link of the interview as soon as it will be online.
I think the thing that distinguishes CCL from a lot of organizations is that we never approach the people we lobby in an adversarial way, even if they disagree with us. We go into all our meetings with gratitude, respect and appreciation for the people we talk to, often times doing more listening than talking in order to find the common ground. For me, personally, I call this “Letting go of being right.” Because if you always need to be right, then that means the person you’re talking to at some point will be made to feel wrong, and that shuts down the conversation. Ultimately, I’ve learned that I have a choice: I can be right, or I can make a difference. I choose to make a difference.

WE ACT – struggling against environmental racism