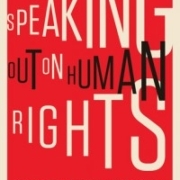 Canadians like to see themselves as champions of human rights in the international community. Closer to home, however, the human rights system in Canada – particularly its public institutions such as commissions and tribunals – has been the object of sustained debate and vehement criticism, based largely on widespread myths about how it works. In Speaking Out on Human Rights, Pearl Eliadis explodes these myths, analysing the pervasive distortions and errors on which they depend. Canada’s human rights system, a unique legal tradition operating within a powerful modern constitution, is a fundamental mechanism for ensuring the practical application of our national commitment to tolerance and inclusion. Drawing on in-depth interviews with Canada’s leading human rights experts and extensive original research, Eliadis explores the evolution of commissions and tribunals as vehicles of public policy and considers their mandate to mediate rights conflicts in such contested areas as hate speech, religious freedoms, and sexuality. She provides a frank assessment of how Canada’s human rights system functions and argues that misplaced critiques have prevented urgent and necessary discussions about the reforms that are needed to improve fairness and equality before the law and to ensure institutional independence, impartiality, and competence. Speaking Out on Human Rights shows how our human rights system plays a unique and important role in the rights revolution both in Canada and internationally and offers promising avenues for its future development.