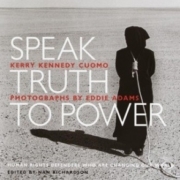 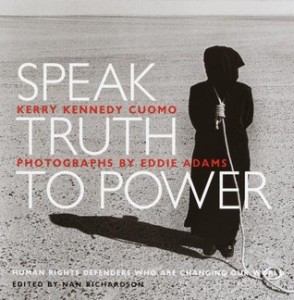 Speak Truth to Power presents an inspiring rainbow of heroes from more than thirty-five countries and five continents. In searing and uplifting interviews, veteran human rights defender Kerry Kennedy Cuomo examines the quality of courage with women and men who are dramatically changing the course of events in their communities and countries. Imprisoned, tortured, and threatened with death, they speak with compelling eloquence on subjects to which they have devoted their lives and for which they have been willing to sacrifice — from free expression to the rule of law, from women’s rights to religious liberty, from environmental defense to eradicating slavery, from access to capitol to the right to due process. Accompanying the interviews are a powerful series of portraits by world-renowned photographer Eddie Adams. This is his first book, representing two years of crisscrossing the globe to make these deeply felt and insightful images of courageous individuals, including the internationally celebrated, such as Vaclav Havel, Baltasar Garzón, Helen Prejean, Marian Wright Edelman, and Nobel Prize Laureates the Dalai Lama, Desmond Tutu, Elie Wiesel, Oscar Arias Sánchez, Rigoberta Menchú Tum, José Ramos-Horta, and Bobby Muller. But the vast majority of the defenders are unknown and (as yet) unsung beyond their national boundaries, such as former sex slave and leading abolitionist Juliana Dogbadzi of Ghana, domestic violence activist Marina Pisklakova of Russia, mental disability rights advocate Gabor Gombos of Hungary, and more than thirty others

The World Reimagined: Americans and Human Rights in the Twentieth Century by...

Dealing With Human Rights: Asian and Western Views on the Value of Human Rights...
Scroll to top