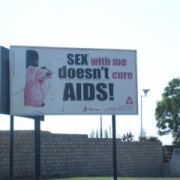 In this project we would like to introduce you to a socio-ethnic problem related to HIV and AIDS in Africa, the virgin myth.

In this link you can read a very interesting article by Suzanne Leclerc-Madlala.

Source: IRIN
Most child rape perpetrators are not brought to justice and remain in the community

johannesburg, 25 April 2002 (IRIN) – In a country long-sickened by the level of sexual violence, a shocking series of child rapes has stunned South Africa and left people grasping for answers.

Among the theories advanced to explain the phenomenon is the apparently accepted myth that sex with a virgin cleanses one of HIV/AIDS. But that has ignited a renewed controversy over whether the folk tale alone is behind the sexual assaults against children that in some cases have been literally babies.

The prevalence of sexual violence is reflected in the stark statistics. According to the South African Police Services, 37,711 rape cases were reported to the police between January and September 2001: but they acknowledge that most rape survivors do not report to the authorities. According to a study by the University of South Africa (UNISA), one million women and children are raped annually.

A recent survey conducted by UNISA at the Daimler Chrysler plant in East London, found that 18 percent of the 498 workers questioned believed that having sex with a virgin would cure HIV/AIDS.

A previous study in 1999 by sexual health educators in Gauteng – the country’s economic hub – found that 32 percent of the participants interviewed indicated that they believed the myth.

However, researchers from the Medical Research Council (MRC) disagree. They argue the folk tale was not as widespread as commonly believed, and did not satisfactorily explain child rapes.

“The idea that having sex with a virgin cleanses you of AIDS does exist and there have been reported cases of this as a motivating factor for child rape. But evidence suggests that this is infrequently the case,” said Dr Rachel Jewkes, director of the MRC’s Gender and Health Research Group.

Luke Lamprecht, the manager for the Teddy Bear Clinic in Johannesburg – a referral point for child sex abuse cases in the city – reported one child rape case where the perpetrator believed the myth. This happened four years ago when the child’s mother agreed that the HIV-positive man could rape her four-year-old in exchange for cash, Jewkes told IRIN.

A South African study investigating injury patterns and the management of child rape, found a one percent sero-conversion rate among children who had been raped. If the myth had played a part, a higher rate of sero-conversion would be expected, she added.

According to Jewkes, there was no evidence overall that infant rapes were increasing in South Africa, nor that any of the recent infant rape perpetrators knew they had HIV.

AIDS activist and rape survivor Charlene Smith, disagrees. “If researchers actually bothered to do real research by going to rape and abuse clinics who directly work with children raped, you would find that the virgin myth is widespread in every community of South Africa and spreading.”

Barbara Kenyon, director of the Greater Nelspruit Rape Intervention Project (Grip) in the Northern Province, said: “When we go out in the community and look at the rapes that took place between 2000 and 2002, it is predominantly children, and they are getting younger and younger.”

Follow-up visits done to children who had been raped, found many of them had become HIV positive, Kenyon said. “The myth is accepted in the community even by educated people,” she added.

The link between the myth and child rape, however, was difficult to prove, Julia Todd, director of Child Welfare in the KwaZulu-Natal province told IRIN.

Most rape perpetrators are not brought to justice. They remained in the community while the child was the only witness and was often viewed as an unreliable one at that, Todd said. Only 10 percent of the cases reported at police stations reached the court system.

“Even then, there are very few convictions,” she added. “Forensic evidence is often not preserved or properly done, so there is no opportunity to discover the real reason behind these rapes.”

But the children’s welfare organisation had seen a considerable drop in the age of rape survivors over the last two years, Todd noted. “When we are faced with more girls under 10 years being raped, we need to look at the reason why,” she said.

In many African cultures, illness is seen as a state of ritual, magical or physical dirtiness with the process of healing described as “cleansing”. Sex is regarded as a process of ritual cleaning in some contexts, for example after bereavement or after Xhosa (a major ethnic group) male initiation rituals.

“So, if people hear of the myth they may think it sounds as if it could be true,” Jewkes said. But that did not necessarily explain child rapes, she insisted.

Smith stressed that rapists who acted on the myth, were “not necessarily monsters”. The reason for the prevalence of virgin rapes was a lack of treatment for the disease, she said. The rapists were desperate people, looking for ways of treating themselves.

Information about access to treatment should be readily available, to counteract such beliefs before they were acted on, Smith said.