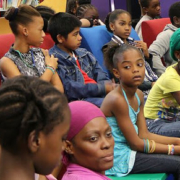 By Milena Rampoldi, ProMosaik. In the following another interview which is part of our interview campaign about projects struggling against violence against women. We spoke with ShernaAlexander Benjamin of O.A.B.I., and asked her about the objectives of her organisation and about general issues concerning gender-based violence.

Milena Rampoldi: What is OABI and what does it stand for?
Sherna Alexander Benjamin: O.A.B.I stands for Organization for Abused and Battered Individuals. O.A.B.I is a non-profit organization which was founded in 2008 and officially launched in 2011, it lobby’s for the prevention, reduction and elimination of all forms of violence against women and girls, their economic and academic empowerment and advancement, pushes for gender equity and equality, and work for adequate national, regional and international awareness about gender-based violence. Being a non-profit at present we are solely dependent on the goodness of concerned citizens to assist us with our work and support with resource mobilization. We are also in the process of developing a social entrepreneurship model and with external support O.A.B.I will become sustainable.
What is gender based violence?
Gender-based violence is any direct or indirect act of violence committed against another person regardless of their gender. Such acts of violence can be physical, sexual, psychological, financial, educational, or religious in nature, and seeks to instil fear, intimidation, coerce, shame and or cause severe pain, physical and sexual harm, and death to a person.

Which are the best strategies to help women?
There are no sure-fire strategies which can be developed to help women, if we must help women we also need to help men.  Developing strategies which exclude men are not wise and may not be fully effective as we also need to work with men to change some of the accepted norms about women and girls, encourage them to speak with their peers about respecting women and standing against all forms of violence against women is a crucial part of the process when it comes to helping women. Education increases knowledge and the wise use of knowledge changes mind-sets which leads to action. Educating women and girls about their individual human rights, their nation’s laws regarding women and gender, about how to lobby for change using non-violent protest, the organization of effective groups to advocate for women and lobby for policy and legislative change, job creation, technology use, economic and academic advancement, and individual empowerment and emotional self-defence are just some of the strategies which can be employed to help women and girls.
How is violence related to cultural traditions?
Research in the area of violence against women and girls show some linkages between violence and culture. Within each country there are a variety of cultures while there may be one or two dominant cultures there are numerous sub cultures. Culture is learned, shared and made by members of society it guides values, beliefs and behaviours. Some cultures socialize their men and boys to view women as property, things and only valuable purpose is for the extension of the family, other cultures view women and girls as invisible objects who must be totally subjected to the authority of the man even if this authority violently abuses the woman many persons do not speak out because the constant and consistent culture of violence is not seen as violence. Some cultures have taught women that they must be shamed and beaten by men to be considered worthy and many cultures use religion and religious scripts to violate and abuse women and once again base on the culture this is seen as normal. Hence the reason I stated in my previous response that ‘there is no sure-fire strategy.

ProMosaik thinks that education is the best way to overcome violence. What do you think about it?
Education is one of the instrumental ways to over violence however being educated and not implementing or using that education can also lead to more violence, action must always follow education, you make people aware through education and this education expands an individual’s knowledge base, action coupled with education is necessary for any change and for the reduction of gender-based violence.
How important is the education of men to struggle against gender based violence against girls and women?
Even in modern societies men are still considered to be the leaders working with men and not against them is a step in the right direction, both men and women have a right to be on the earth, they both can be perpetrators and or victims. Educating men to work within their societies and groups to change the negative culture about women and girls is not only practical but necessary. Women working with men for change is the way forward as men can begin open and private conversations with their peers about gender, and create cultures where women and men feel safe, secure, respected, embrace equity and equality.
https://promosaik.org/wp-content/uploads/2017/02/11104.jpg 291 640 promosaik https://promosaik.org/wp-content/uploads/2020/02/Promosaik_brandwordmark.png promosaik2017-02-26 12:15:072017-02-26 12:15:07Sherna Alexander Benjamin - O.A.B.I.