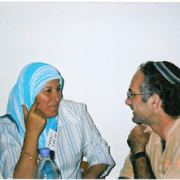 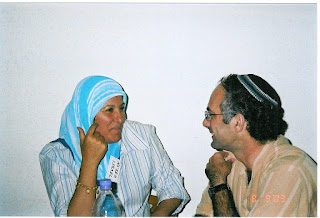 by Milena Rampoldi, ProMosaik e.V. – Our interview with Yehuda Stolov of the Interfaith Encounter Association. ProMosaik e.V. is convinced that interreligious dialogue and empathy can promote peace all over the world, and at the moment in particular in the Middle East. Even if the conflict in the Middle East is not a religious one, interreligious empathy can help. The mission of the Interfaith Encounter Association is the following: The Interfaith Encounter Association is dedicated to promoting peace in the Middle East through interfaith dialogue and cross-cultural study. We believe that, rather than being a cause of the problem, religion can and should be a source of the solution for conflicts that exist in the region and beyond. I would like to thank Yehuda for his time, and also for the nice photos he sent us. 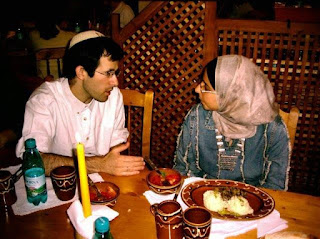 Milena Rampoldi: ProMosaik e.V. is convinced that interreligious empathy can promote a culture of understanding, peace, and respect of human rights? What do you think about it?
Yehuda Stolov: This statement goes to core of IEA’s mission. We strongly believe that peace in the Holy Land can be built in a sustainable way only through the development of inter-personal and inter-communal relations based on deep mutual understanding and respect and characterized by friendship and mutual care, which are also manifested in respecting each other’s rights. While in other contexts peace and human rights might be enforced through the power of the state, in the very small Holy Land, where communities are in high proximity, this is not a realistic option. Indeed the building of peaceful inter-communal relations is long (ten to twenty years if carried out intensively) but not only that it is the only way but it also will then provide the benefit of harmonious joint living together. 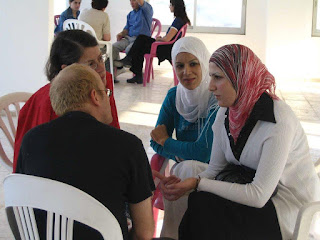 MR: What are the most important objectives of your initiative?
YS: The Interfaith Encounter Association (IEA) developed a very effective model, as proved in several qualitative and quantitative researches. Active interfaith dialogue is used to help people overcome their prejudices and fears, replacing them with genuine understanding of the ‘other’ that supports the building of mutual respect, friendship and trust.
This is done not as one time meeting but usually in the framework of an ongoing group of interfaith encounter, that provides a safe space for intimate encounter for people of neighboring communities, develops into a model of the desired inter-communal relations that combine friendship and respect for diversity, and act as a mechanism to transform the wider communities.
With this effective methodology our objective now is to engage tens and hundreds of thousands of people in effective encounter groups with their neighbors. We also aim to provide wide array of types of groups (we already have – groups for everybody, for young adults, for women, for healthcare professionals, for educators, for religious leaders etc.) – so that every person will have a group that is both close to their home and close to their heart, enabling them to both easily join and to enjoy.
With time, in every area in which the group managed to touch enough people, we expect to see apparent improvement in inter-communal relations also on the macro level. 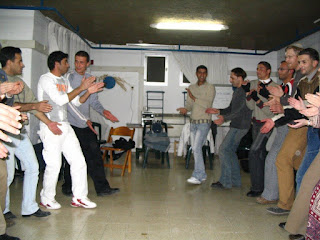 MR: We think that Islam and Judaism are so near as so other religions in the world. How can we help people to recognize this? Which strategies do you implement to reach this?
YS: Religions and cultures often have many similarities between them, which is obviously the case for Judaism and Islam, and they also have their differences. We enable, encourage and empower people to actively engage in joint study of the similarities and differences, on a given theme, between Jewish, Muslim and Christian teachings in an open, deep and respectful way. The process guides participants to discover the similarities and celebrate them as well as to point out the differences as interesting and enriching, not as a source of threat. Through this experience, participants train themselves to build friendships with people they disagree with. 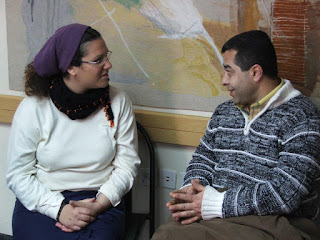 MR: Which are the most important obstacles in the interreligious dialogue with Christianity?
YS: In dialogue between Jews and Christians theological differences (such as the trinity and the dual nature of Jesus) are more apparent than in dialogue between Jews with Muslims. Still, the same approach of highlighting what is common and friendly disagreeing on what is different – allows for fruitful conversations that build relationships. 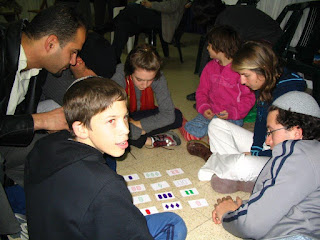 MR: How can our work as interreligious dialogue and peacemakers promote peace in the Middle East?
YS: The conflict in the Holy Land may have begun as competition on control of the land and its resources, but the reason for it to continue so long lies elsewhere. The land and its resources are definitely enough for all the land’s inhabitants but they failed so far to find a way to share them. This is due to the deep mutual suspicion, fear and mistrust that lead to the feeling, in both sides, that the conflict is inevitable “because of them”. As we could see during the Oslo process, positive steps of “the other side” were perceived as tactical while negative steps were perceived as revealing the true intensions. With time – this approach led to the collapse of the Oslo process and to the second Intifada.
In order to uproot this approach, we need to engage large numbers of Israelis and Palestinians in conversations that build relations, inter-personal and inter-communal relations. During the conversation process mutual understanding, respect, trust and friendship are constructed, first between individuals and then between communities. Once these exist, positive steps will be considered as manifestations of the real intentions and negative steps will be understood as mistakes of exceptional individuals. When inter-communal relations will be generally characterized by friendship and mutual care, political models can be not only agreed upon but also sustained over time. 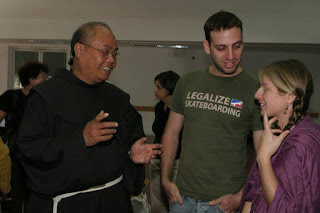 MR: For me, Judaism has a deep ethical conception which is universal and not tribal as many people think. How can we explain this to the Jewish groups who discriminate Non-Jews in the name of Judaism?
YS: I agree. The Jewish nation was chosen to be the avant-garde that sets the example, teaches, encourages and empowers humanity on the building of a whole society that is geared towards the implementation of values such as ethics, worship of God, justice and harmony. I strongly believe that most people who stress Jewish dominance over non-Jews do so due to lack of sufficient study of the Torah teachings, while some of them do so due to influence of the political conflict.

“Palestine is not a local issue, it is a global issue with global ramifications”ProMosaik...

“There is good reason for pessimism”: Adam Keller, Israeli paci...
Scroll to top