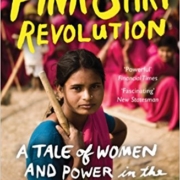 Sampat Pal was married at twelve, essentially illiterate. Today she leads a vigilante group fighting for women’s rights: the Pink Gang. When Sheelu was arrested for stealing from a powerful politician, she was sure that she would be forced to accept a prison sentence, not least because she alleged that she had been abused b y a man in the politician’s household. But then Sampat Pal heard word of the charges, and the formidable commander of the pink-sari-wearing, pink-baton-wielding, 20,000-strong ‘Pink Gang’ decided to shake things up. In the story of Sampat Pal and the Pink Gang’s fight for Sheelu, as well as others facing injustice and oppression, Amana Fontanella-Khan delivers a riveting portrait of women grabbing fate with their own hands – and winning back their lives.