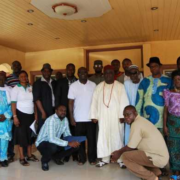 By Denise Nanni and Milena Rampoldi, ProMosaik. In the following our interview with Peter Adanini, Mrs. Bolanle Alabede a Senior Research Fellow and the Director Rev. Fr. Anselm Adodo of the organisationPaxAfricana, a research institute for social innovation in Africa. We would like to thank the Director of pax africana Rev. Fr. Anselm Adodo, who is the founder of the model ‘Communitalism’ as an alternative to capitalism. We are also very much appreciative of Mrs. Bolanle Alabede, a Senior Research Fellow of pax africana for her dynamism and expertise in the course of responding to our interview question. We are immensely very thankful to Peter Adanini who in no small measure contributed to the answers to the interview questions. There is no knowledge without action. Knowledge can only exist in-action. Dynamic development, and happiness are also interconnected, as Peter shows us. African challenges need African solution, an African problem-solving in the respect of diversity. 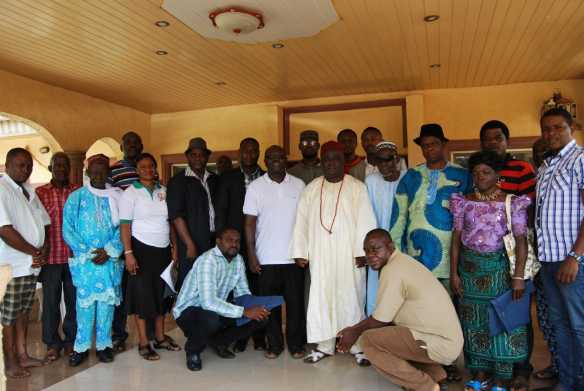 Participatory Action Research group with Ewu King in his palace
How was PaxAfricana founded and in which context?
The Africa Centre for Integral Research and Development (ACIRD) is about research, both process-wise and also substantively, that leads to social, if not also technological, innovation in Africa, drawing from all corners of the globe, East, West, North and South, while remaining grounded in African soils.
There are firstly in Africa and other parts of the world brilliant individuals who have done marvellous research work, tacitly, and indeed some have produced, explicitly, excellence academic works in various fields of social research. Most of these individual researchers often die unknown, some are frustrated due to lack of platform to give flesh to their theories, while some simply lose interest in academic work and focus on ‘more important things’. For African philosopher Paulin Haountondji, this is one of the saddest features of knowledge creation in Africa. African intellectuals in diverse fields do research for the sake of research: research that contributes little or nothing to individual, and communal, organisational and societal development.
Pax Africana aims at reversing this trend by emphasising a research-to-innovation process that leads to social innovation, in theory and in practice. In many indigenous societies, when a knowledge bearer dies hisknowledge dies with him. Indeed, a lot of knowledge is being lost,knowledge that appears to be worthless mainly because it is not properlyvalued. Today, we speak of protecting our environment from abuse, andabout protection for rare species of plants and animals. Equally importantis the need to set up international efforts to protect and preserveindigenous knowledge. With every old person that dies in our villages, awhole library of books is lost.
Can you tell me more about Communitalism and its origins?
The theory of communitalism was developed by the founder of ACIRD, Father Anselm Adodo. The details of the theory and practice of this theory are well explained in his new book titled: Integral Community Enterprise in Africa. Communitalism as an Alternative to Capitalism. The term Communitalism is different from communalism or indeed communism. Communitalism affirms that some aspects of capitalism, such as individual inventiveness, are worth pursuing and supporting, but such inventiveness must be put at the service of the community, so that both the individual and the community prosper. The key philosophy of communitalism is ‘we are either happy together as a prosperous community or unhappy together’ and thereby unprosperous. For communitalism, the health and prosperity of the individual cannot be separated from health and prosperity of the local community. Global health must start from global south, so to speak, re-searching local health, not the other way round. In the process the link between individual, community, enterprise and wholeness will be made.
Although, many of us buy and use products from China for example, capitalism does not ask us to think about the conditions of the workers who made these items, especially underpaid women. Those committed to communitalism would enquire about these people, not just the products. They would want to know who assembled the products and whether they are being treated fairly. We must not only think about justice for workers in our local communities, but also for those who work for other companies and other countries. Communitalism requires capitalism to do more: to have a conscience, to care for the environment and for local communities.
COMMUNITALISM:
A THEORY OF INTERCONNECTEDNESS OF KNOWLEDGE AND ACTION. 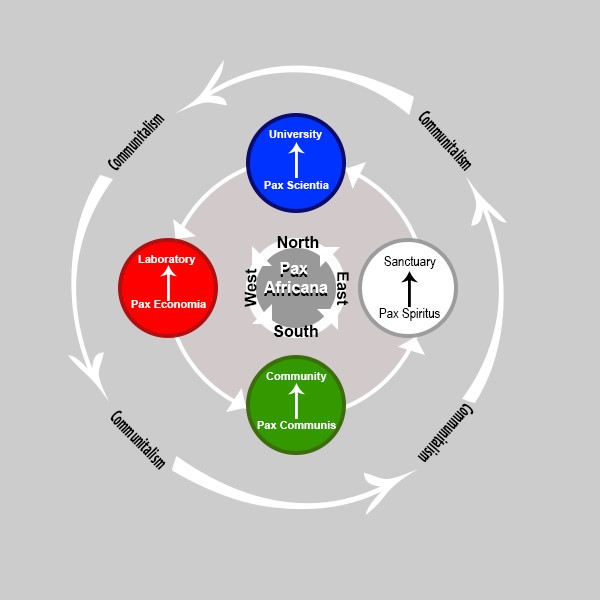 When there is an improvement in the material well-being of the community, the health of the members of the community will also improve. This is the essence of community medicine and Communitalism. Unlike bio health, which tends to focus on disease and neglect the root cause of diseases such as: financial inequality, unjust wages, unfair working conditions and dysfunctional literacy, Community medicine adopts an integral approach to health and well-being. Altogether, and integrally as such, thereby embracing worldviews, or realities, from the four corners of the globe.
One of the objectives of ACIRD, also called Pax Africana, is to institutionalize and practicalize the theory of Communitalism, bridging the gap between research and innovation, between knowing and doing, between sanctuary (spirituality) and laboratory (Science), and between community and the university.
Which are the benefits of the Participative Action Research (PAR)?
1.       The Problem is defined, analyzed and solved by the Community, involving its full and active participation through Relational Education.
2.      Everybody is a committed Participant, Facilitator and Learner in such, Promoting an authentic analysis of social reality.
3.      PAR creates Awareness of the People’s own Resources, mobilizing the Freedom to be Enterprising for self-reliant Community Development.
4.      The ultimate Goal is the radical Transformation of social Reality, aimed at the Exploited, the Poor, the Oppressed, the Marginal.
The distinctive feature of PAR is that it involves animating a whole community at the periphery, and awakens in them the consciousness of their abilities, rights and power to change the course of events. One key path to emancipation in Africa is for the common people to challenge the status quo and the ruling elite, and free themselves from unjust social structure that puts them at perpetual disadvantage. Communitalism offers a methodical and peaceful way to do this as opposed to violent activism, which, as history has shown, hardly ever results in sustainable change. People cannot be liberated by a consciousness and knowledge other than their own. It is therefore essential that people develop their own indigenous consciousness-raising and knowledge generation, and this requires the social power to assert this. An immediate objective of PAR is to return to the people the control over their own verification systems.
In which ways do you promote the community empowerment and activation?
The marginalized, the oppressed must first of all cultivate a radical consciousness of their situation, interpret it and then confront theoppressor. It is not enough to fight for the poor or to speak for the poor.The poor and marginalized should be brought to a consciousness of their condition so they can fight for their own rights. The poor do not love beingpoor. So long as justice for the poor depends on the benevolence of therich, then there is no hope. According to an African proverb, ‘Dogs do notactually prefer bones to meat; it is just that no one ever gives them meat’.Giving money to the poor is like giving them bone. Giving them knowledgeis like giving them meat. When the poor are empowered throughknowledge, they will resist oppression. It is not enough to engage ineducation. The structure of the education itself has to be examined andquestioned. It is not enough to study scientific truths; how science arrivedat such ‘truths’ has to be questioned. Science does not exist independentlyof its cultural context, despite its pretence to undiluted objectivity. Whileeducation can bring liberation, it can also be a means of keeping people inbondage.  ACIRD aims to transform education in Africa through Action Research.  Africa Centre for Integral Research and Development (ACIRD) has in several ways promoted or has been promoting the community empowerment and activation in various communities through some of the programmes highlighted below:
1.       Demonstration farm with cassava processing facilities and an oil mill;
2.      Training for selected group of 100 artisans on innovative and systems thinking;
3.      Support program for small- and medium-sized enterprises (SMEs) through microfinance loans;
4.      Training of local market women and traders on business and technology management;
5.      Youth empowerment through integral skill acquisition techniques
The tenets of PAR were applied by getting the local community fully andactively involved in defining, analysing and solving their own problems.
Retelling the African story is indeed what ACIRD sets out to do, both intheory and action. 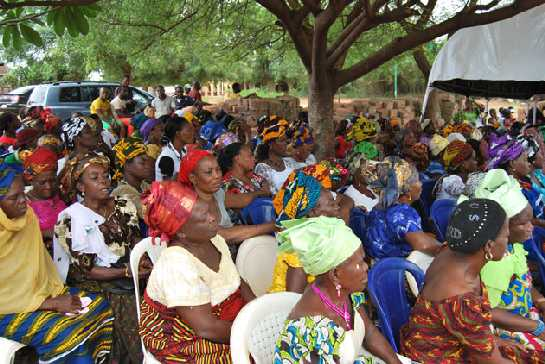 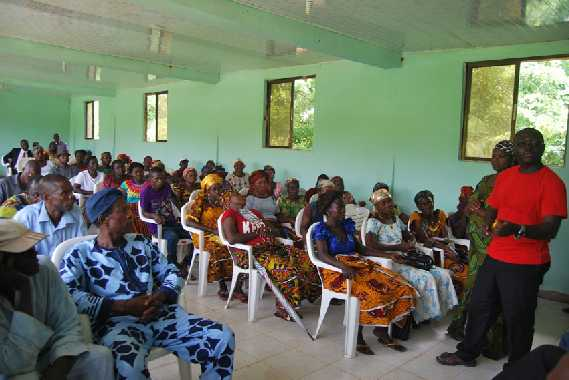 Meeting with local farmers – ‘Everybody is important’ 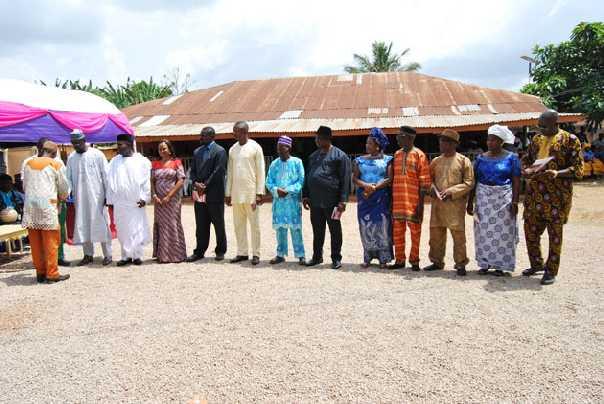 Official inauguration of Ewu Development and Educational Cooperative society (EDEMCS) in the rural community of Edo State, Nigeria, in February 2015 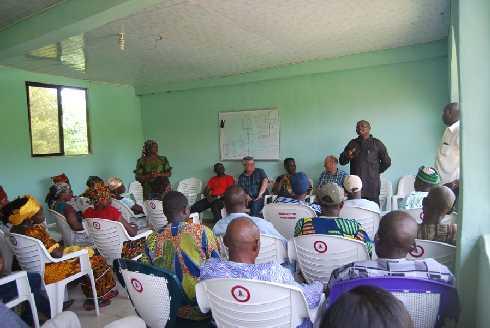 April 2015: Sharing of ideas by local farmers and agricultural experts 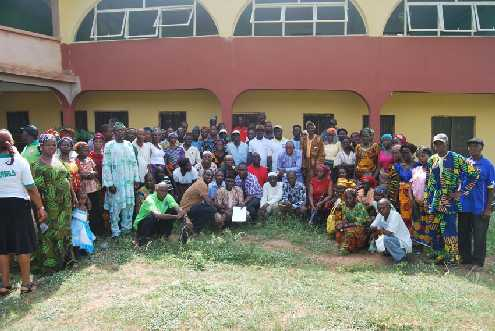 Local farmers association after a meeting at EDEMCS officein 2015
In December 2016, another group of twenty men, women and youths were presented with a cheque of $500 each. They are all local entrepreneurs with a passion to earn decent living in a sustainable way while also benefiting the community. They were selected from the different communities in Ewu kingdom. Each loan attracts a mere 2% interest.
The king of Ewu, Abdul Rassaq Ojeifo with EDEMCS executives and the beneficiaries of the $10,000 Dollars benevolent loan
The loan for EDEMCS was made available through a triangular partnership between ACIRD, based in the rural community of Ewu, Edo State, and Sterling Bank, through a special project aimed at empowering local communities and CISER, a Centre for Integral Socio-Economic Research, based in Lagos, Nigeria’s commercial capital. CISER is made up of a group of young Nigerian bankers who are passionate about evolving a new model of development banking and entrepreneurship built on local culture, worldview and community. Such a model will be well suited to the African context and tradition, rather than merely imitating the western model, using the Ewu community development association, EDEMCS, as a test case. Co-founder of CISER, Basheer Oshodi, believes that the principles of Islamic banking and finance can be adapted to bring about authentic socio-economic development in Africa.
How has civil society been responsive so far?
It is quite interesting and worthy of note that African Centre for Integral Research and Development has been accepted by all stakeholders; the reception of ACIRD cuts across all works of life from the academia and the public sector (inclusive of the presidency). The private sector, especially the banks and organised labour are not left out. The Kings and local chiefs of various ethnicity and their subjects have a good relationship with ACIRD as demonstrated above. The various market unions, religious organisations, artisans and farmers who are major beneficiaries are yawning for more.
In light of the above, we at Africa Centre for Integral Research and Development are poised to do more, to liberate our immediate communities to be self-sufficient and self-sustaining, through the use of our model of PAR and communitalism. We are ready and willing to work with and share our model with other organisations in Africa and beyond. Lastly, so far, we have realised that a happy people, leads to a happy community and a happy community gives birth to a prosperous nation.

John Seager of Population Connection – information and training about...

WE ACT – struggling against environmental racism
Scroll to top