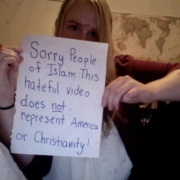 I would like to thank Pressenza Hong Kong for the publication of our interview with the Dutch Islamophobia expert Dr. Ineke van der Valk about her new publication.

We think that a European network against Islamophobia is essential to affirm Muslims’ rights in Western countries.

Dr. Phil. Milena Rampoldi opposes islamophobia in Europe, and in saying NO to religious, ethnic, and cultural discrimination of all kinds, writes on the topic and now has a second publication.
“The present report Monitor Muslim Discrimination is my second publication on islamophobia in the Netherlands. It discusses the Dutch situation from where the first report ended, in particular the time period after 2011. The underlying research project builds on this earlier research.”
Here below she interviews the report’s author, Dr. Ineke van der Valk.

Milena Rampoldi: What has changed in the Netherlands since your first book?

Ineke van der Valk: The government has changed. PVV is now in the opposition and no longer supports the government which it used to do in 2009-2011. The PVV radicalized (see chapter on PVV, p. 32-39); the rise of IS and its terror adds to a breeding ground for prejudices and discrimination against Muslims. The incidence on discriminatory violence against mosques has relatively speaking high in 2013-2014: 55 incidents in 39 mosques (see chapter 6).

Milena Rampoldi: What are the most important objectives you would like to reach with this second publication about Islamophobia in the Netherlands?

Ineke van der Valk: The objectives of this project are:
1. to increase insight into islamophobia as a form of racism, its causes, incidence,
impact and consequences;
2. to obtain public and official recognition of islamophobia as a separate form of
discrimination comparable to anti-Semitism, in order to better monitor it in the
future;
3. to contribute to the development of counter policies and practices to be used by
municipalities, national governments, civil society organizations and the public at
large.

Milena Rampoldi: How important are the studies about Islamophobia in Europe and why?

Ineke van der Valk: Muslim discrimination and underlying ideologies are often denied, downplayed and depolitized. Studies may highlight the phenomenon in order to gain insight, knowledge about its structure, prevalence, cause and effects. In order to better deal with it

Milena Rampoldi: How can we promote a culture of acceptance and respect between Islam and the Western culture?

Milena Rampoldi: How does a culture of tolerance avoid radicalization of Muslims?

Ineke van der Valk: When people, in particular youngsters, feel accepted they do not need to flight/ seek refuge into lethal ideologies.

Milena Rampoldi: What have you reached with your studies about Islamophobia and what do you want to achieve in the near future?

Ineke van der Valk: My research has been essential in putting the issue on the media and political agenda’s in the Netherlands; compared to the situation before 2011 there are now many social actors working in this field (CSOs ). Together we are working for solutions. See also p. 43-45 concerning the changes in politics of the government

Milena Rampoldi: Why is the exchange of data and experience between the Netherlands and Germany so important to oppose to Islamophobia?

Ineke van der Valk: Not only with Germany but with other European countries as well (see p 66-67). It is not only a Dutch but a European and even western and international problem, comparative work is necessary.

Gilad Atzmon: Music As A Language For Peace In Palestine – on MintPre...
Scroll to top