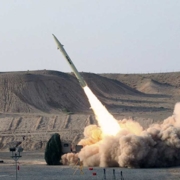 Israel has used three internationally banned weapons in its recent attacks on the Gaza Strip, a military expert said.Safwat Al-Zayat, a retired Brigadier General in the Egyptian Army and an expert in military affairs, told the Anadolu news agency that “Israel’s use of such internationally banned weapons is a continuation of the approach it adopted in Operation Cast Lead in 2008/2009.”

Al-Zayat added that Israel used Dense Inert Metal Explosive (DIME), which had already been used in Operation Cast Lead. DIME weapons spread inert metal atoms that penetrate the human body and are difficult to get out of human tissue.

He added that DIME munitions are used in the form of bombs that are propelled by droned.

“Once the shell explodes, its cover degrades to let the lethal molecules spread across an area of four meters. The injury may be less serious when the person is far from the centre of the blast. Outside the four-metre diameter, the victim may survive, but may be subjected to the amputation of limbs due to shrapnel that cuts tissue and bone,” he explained.

Al-Zayat pointed out that Israel’s use of these bombs in its current war has been more extensive compared to Operation Cast Lead.

The second internationally banned weapon used by Israel in its current war is armour piercing bombs. According to Al-Zayat, they cause big explosions and result in a large number of civilian deaths.

He explained that in regular wars these bombs are used against underground fortifications of central commands and ammunition depots. They penetrate long distances with high explosive capabilities.

He pointed out that “Israel has used such bombs against civilian homes, under the pretence that there are tunnels under them or rocket launchers. This has resulted in the destruction of these homes and surrounding buildings and the fall of large numbers of victims.”

Al-Zayat said the third internationally prohibited weapon used by Israel in Gaza is white phosphorous, which mixes with oxygen to form a transparent wax and causes fires and thick, white smoke.

Israel has used less white phosphorus in its current assault on Gaza compared to during Operation Cast Lead.

The Israeli army has been waging a war on the Gaza Strip since July 7 under the pretext of stopping rockets fired from Gaza at Israeli cities and towns. As of Sunday, the war has killed approximately 1,830 Palestinians and injured 9,370.