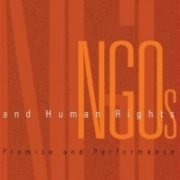 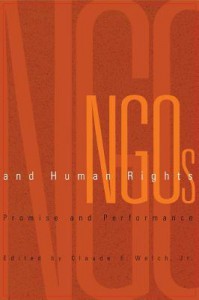 The proliferation of nongovernmental organizations, or NGOs, is one of the most striking features of contemporary international politics. While states remain the major protectors–and abusers–of human rights, NGOs such as Amnesty International have emerged as central players in the promotion of human rights around the world.

As advocacy organizations, human rights NGOs work with or against governments in developing agendas for action. Through treaty negotiations with governments, they seek to establish international standards for state behavior. To mobilize public opinion, they investigate and report human rights abuses and offer direct assistance to victims of those abuses. They lobby political officials, corporations, international financial institutions, intergovernmental organizations, and the media. As their numbers increase, so their range of activities continues to expand. Today, NGOs are increasingly involved in providing services, such as holding training programs for upholding the rule of law and providing humanitarian assistance in disaster areas.

There is little doubt that NGOs have influenced the human rights practices of governments and popular perceptions of human rights. Agreement on what NGOs do best remains an area of continuing scholarly debate. The authors of NGOs and Human Rights–all respected scholars and activists–assess the performance of NGOs by examining a number of significant organizations, including Amnesty International, Human Rights Watch, and the International Commission of Jurists. They identify the goals of such organizations, analyze their strategies, and consider the resources necessary to implement those strategies effectively. They also take a look at some of the major financial supporters of NGOs, such as the Ford Foundation. Throughout the chapters, the authors reveal promising evidence that transnational networks of organizations can both exert pressure on states and influence public opinion, resulting in the improved protection of human rights around the world.

Not Enough: Human Rights in an Unequal World by Samuel Moyn