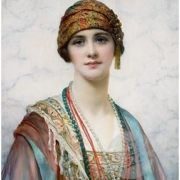 Previously: Dr. Rampoldi’s introduction to the series and Sultan Raziyye of Medieval India.

Taken in chronological order, the second female ruler to legally hold the reins of power in the Muslim world of the Middle Ages was Shejer üd-Dür (or Sejeret üd-Dür), wife of Melik Salih, of the house of Ayyub. Indeed, it was through Shejer üd-Dür, a female ruler, that there was a transfer of power between this state and the Egyptian Mamluks. She is, I would say, the most known female ruler of Islam, partly because she reigned during the age of Crusades and was responsible for the imprisonment and then for the release of the French King Louis IX.

Shejer üd-Dür ruled together with her husband Melik Salih Nejmüddin Ayyub, the eldest son of the Ayyubîd state’s fifth ruler, El-Kâmil. Since Melik Kâmil was absent in Syria on a prolonged campaign against the Crusaders, he appointed his son as his heir and left him as his representative in Egypt.

In 1229, Melik Kâmil returned to Egypt after reaching an agreement with Emperor Friedrich II that he would not return to Jerusalem for ten years. His relations with his son Nejmüddîn Salih became extremely strained, owing to the attitude of the mother of one of his other sons, Melik Âdil.

In order that her own son might come to the throne, Melik Âdil’s mother tried to influence her husband El Kâmil against Salih. In 1232, Mongols — and the Harezmis who were fleeing from their attacks — began to threaten El-Kâmil’s borders. Melik Kâmil, aiming both to get his son out of Egypt and to stop the raiders, gave command of the army to Melik Salih Nejmüddîn Ayyub and sent him to Syria.

In 1236, he gave him Hisn-Keyfa, Urfa, and Harran, which had been conquered at that time, as fiefdoms. Thus, Salih became a prince in the East whom nobody had the courage to interfere with. However, when, in that same year, Melik Kâmil died in Damascus, the situation was altered. In Cairo, Melik Âdil was recognised as his father’s successor.

When Es-Sâlih Ayyub received the news of Melik Kâmil’s death, he was engaged in besieging Ratha. After many other struggles and intrigues in 1238-9 he went to Damascus to then march to Egypt where he reached power by taking Melik Adil’s throne and extending the borders of the Ayyubid reign. Conflicts with Mongols and Crusaders emerged during his reign. He died in Mansura in 1249 during the conflict with the French Crusades of King Louis IX.

Melik Salih was survived by one son who had no competence to be the good and wise ruler his father had been. So Shejer üd-Dür, the wife of the dead ruler, started becoming important in politics because of her beauty, intelligence, and strategic thinking. She had always reigned alongside her husband until he died.

The wise Queen Shejer üd-Dür knew only too well the danger that would arise from an announcement that the Egyptian throne was vacant, at a time when the French were occupying Damietta, and so she hid the news of the sovereign’s death. After this, Shejer üd-Dür, summoning the commanders, announced that she had appointed Melih Sâlih’s son Turan Shah as her successor. This way it was possible to win a great victory against the French, even imprisoning King Louis IX. But Turan Shah become greedy and wanted his father’s treasure that Shejer üd-Dür had spent to finance the battle. He started a rebellion with his fellows and was killed in 1250.

So Shejer üd-Dür (whose name means “Pearl Tree”) became the first Mamluk ruler of Egypt. After Turan Shah’s death, the army and the commanders had great difficulty in choosing a new ruler. Finally, the commanders of the Sâlihî and Bahrî Mamluks, and the leading statesmen and members of the Council met together and came to a definite decision to put Shejer üd-Dür, whose intelligence and energy they greatly admired, on the throne.

Again, as was the case for Raziyye in the Sultanate of Delhi, a woman was chosen as ruler because of her political and strategic competency. It is important to understand that Shejer üd-Dür was brought to the throne of Egypt by election (“ihtiyariyye”).

As with the other Egyptian rulers of that period, Shejer üd-Dür needed a seneschal. İzzüddîn Aybek, who was originally one of the slaves bought by Melik Salih, and at this time one of the foremost of the commanders, was found suitable for this post. He was accordingly put in command of the army. In the field of foreign affairs, Shejer üd-Dür reached a great diplomatic agreement to exchange the occupied city of Damietta for King Louis IX’s freedom. So she brought order and security to the country and more than ever won the support of the people for their wise and generous Queen.

Another important aspect of her rule was that she always involved her counsellors (the so called “Shura” council) in all political decisions, an important concept called Islamic “shuracraty.”

But soon her power was challenged by the Caliph who opposed female rule by mentioning the tradition of the Prophet Muhammed, which we have already considered in my article about Mahmud Badawi’s tragedy about Shajarat ad-Durr’s political career.

The voluntary abdication by Shejer üd-Dür from the throne was an important gesture towards the Caliphate in Baghdad. In order that their beloved Queen should still retain power the Emirs arranged her marriage with Aybek, whom they then recognized as Sultan of Egypt. Here you can see how women use diplomatic strategies to keep their power by challenging Muslim orthodox tradition.

So after her marriage with Aybek, the queen continued to rule as she had before and it was she who, from behind the curtain, held the actual reins of government. But many opposed Aybek’s rule because they wanted a ruler from the Ayyubids to rule with Melik Eshref who was still too young. Aktay was the leader of the Sâlihî party, which wished him to share the throne with Melik Eshref. But Aybek killed Aktay and imprisoned the young Melik Eshref to maintain his position as ruler. After this victory of the Sâlihî faction, Aybek now wanted to be free of his proud wife Shejer üd-Dür, who cast a shadow over his power. So he decided to marry the daughter of the Emir of Mosul.

Shejer üd-Dür had always been accustomed to praise and admiration and had always held a position of great importance, a sovereign in name and in fact. She could not endure the thought of losing power, either from the point of view of personal feelings or from the political standpoint that Aybek — who until recently had ruled her heart as well as the country — should take another woman of royal blood to be on equal footing with her. She was consumed with jealousy, sorrow and rage; and all her finer feelings were replaced by thoughts of revenge.

Here we see how this woman now enacted a Realpolitik strategy made of hate, revenge, and violence, in opposition to her past ideal of Islamic democracy, election, and Muslim devotion to her people. She ordered her Mamluks to murder Aybek. But after this bloodthirsty action the same problem had to be attacked: a new adequate ruler had to be found to replace Aybek. In the end she was killed by the new king and his faction.

Again we can see how the analysis of the biography, career and fall of a female ruler in Muslim history is characterized by the conflict between political utopia and harsh political reality.

This entry is based on “Female Sovereigns in Islamic States.” You can find it on Amazon here.