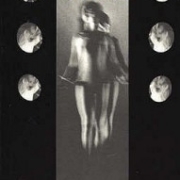 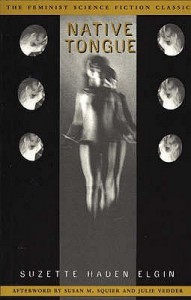 Called “fascinating” by the New York Times upon its first publication in 1984, Native Tongue won wide critical praise and cult status, and has often been compared to the futurist fiction of Margaret Atwood. Set in the twenty-second century, the novel tells of a world where women are once again property, denied civil rights and banned from public life. Earth’s wealth depends on interplanetary commerce with alien races, and linguists–a small, clannish group of families–have become the ruling elite by controlling all interplanetary communication. Their women are used to breed perfect translators for all the galaxies’ languages.

Nazareth Chornyak, the most talented linguist of the family, is exhausted by her constant work translating for trade organizations, supervising the children’s language education, running the compound, and caring for the elderly men. She longs to retire to the Barren House, where women past childbearing age knit, chat, and wait to die. What Nazareth comes to discover is that a slow revolution is going on in the Barren Houses: there, word by word, women are creating a language of their own to free them from men’s control.

The Robber Bride by Margaret Atwood

Witches, Midwives and Nurses: A History of Women Healers by Barbara Ehrenreich,...
Scroll to top