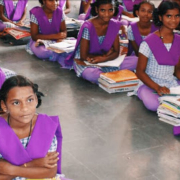 By Milena Rampoldi and Denise Nanni, ProMosaik. In the following, another interview with an organization working for children, the MVF Foundation in India, whose aim is to take children from work, because no child has to work, and to support them to get a good education to manage their lives. Would like to thank Arvind for the detailed answers.

What are the main activities of MV Foundation?
The Mamidipudi Venkatarangaiya Foundation (MVF), a registered trust, was established in 1981 in memory of educationist and historian Prof. Mamidipudi Venkatarangaiya.
Based on the non-negotiable principle that ‘no child works and every child attends full time formal school as a matter of right’, MVF has been working towards abolition of child labour in all its forms and mainstreaming them into formal schools, for more than two decades now. As a rights based grass root level development organisation, MVF has been actively conducting the following programs:
1.       Elimination of child labour through community mobilisation
2.      Campaign and advocacy at all levels for elimination of all forms of child labour
3.      Sensitisation of communities for prevention of child marriages
4.      Awareness programs about legal laws on child labour and education.
5.      Programs for implementation of Right to Education Act, 2009
6.      Formation of Balika Sanghams (girl youth forums) of adolescent girls from the village level
7.      Strengthening of local institutions such as Gram Panchayats and School Management Committees for implementation of RTE Act, 2009.
Why does the Child and Adolescent Labour Act not suffice to protect children?
The Child and Adolescent Labour Prohibition and Regulation Act, 2016 is an amendment to the Child Labour (Prohibition and Regulation) Act 1986. It prohibits the engagement of children in all occupations and processes up to 14 years of age just so that they would enjoy their fundamental right to education under the ‘Right of Children to Free and Compulsory Education Act, 2009’ (RTE Act). At the same time the amended Act allows children up to 14 years to help in family in fields, home-based work, and forest and so on; and as artists in entertainment industry or sports activity subject to such conditions and of safety measures after school hours or during vacations.
Further adolescent children in the age group of 14-18 years are prohibited from child labour in hazardous occupations and processes such as in mines, explosives and hazardous occupations set forth in the Factories Act, 1948.
It also makes engaging child labour a cognizable offence punishable with imprisonment for a term not less than six months to extend to two years or with fine not less than Rs. 20,000 to 50,000 or with both.

Snehalaya in Ahmednagar in India