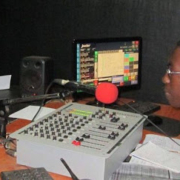 By Denise Nanni and  Milena Rampoldi, ProMosaik. In the following our interview with Henry Kabwe of the MNCRDAfrica, the Media Network on Orphans and Vulnerable Children supporting children in Eastern and Southern Africa. Would like to thank Henry for his detailed answers.

How was the MNCRD founded?

The idea to form the Media Network on Orphans and Vulnerable Children (or OVC Media Network) was muted at a media breakfast hosted for media heads in Zambia by Care International’s Strengthening Community Partnerships for the Empowerment of Orphans and Vulnerable Children (SCOPE-OVC) project with the United Nations Children’s Fund (UNICEF) the Ministry of Sport, Youth and Child Development, and the Ministry of Community Development and Social Services in 2003. One of the permanent secretaries that chaired the meeting from government suggested to the media heads in that breakfast that a media network would help to coordinate the consistent coverage of children. An interim committee to start the process of registering was led by the late journalist Singy Hanyona (freelance environment journalist) with others like Chris Wapamesa (Zambia News and Information Services – ZANIS), Rosaria Lubumbashi (ZANIS), Brenda Zulu (Today newspaper) and Felix Kunda (SCOPE-OVC). The Media Network’s initial media workshop was held at Masiye Motel in Kabwe District in 2004 where Hanyona opted to be the Vice Chairperson and asked Henry Kabwe to stand as Chairperson. It got registered in 2004 as a Non-Government Organisation under the Registrar of Societies.The Ministry of Sport, Youth and Child Development, the Firelight Foundation of the United States, the Commonwealth Education Fund (CEF) of the UK. and UNICEF started engaging the network.
What are the main issues related to children rights violation in Zambia?
The main issues affecting children in Zambia are sexual abuse, inadequate access to early childhood education, domestic child labour, child marriages, harmful forms of labour, lack of platforms to participate in national development, distance to services such as education and health for children in rural areas, inadequate facilities for child in conflict with the law, and abuse of orphans by relatives of deceased parents through property grabbing. A number of violators get away with it because they either pay their way through parents or law enforcement agencies. In fact, enforcement is a challenge in itself as many cases of teenage patronage to night clubs and gambling are ignored by those responsible for enforcing the law.
What activities/projects do you implement?
The role of MNCRD is to ensure that the public know about children’s rights and how they can hold government accountable to uphold them. It also advocates for the enforcement of children’s rights from the community, traditional structures, district and national levels in making sure that apart from putting mechanisms to protect children, budgets and other necessary requirements are put in place to fulfill that through the media. To increase child protection, MNCRD runs radio and television programmes to raise awareness on the laws and services that can support children. Media bus campaigns to districts to raise awareness on particular issues such as sexual abuse with the Zambia Police, CSOs and the media. Child development activities focus on enhancing the developmental opportunities for all children in Zambia through quality early childhood care, development and education as members of the Zambia National Education Coalition (ZANEC). CSOs in the early childhood education sector have been media skills to promote access for children, especially those that are vulnerable. Through the ZANEC members, media bus campaigns with musicians, CSOs, journalists and Ministry of General Education officials have been conducted in seven provinces. Further, the organisation has partnered with the Ministry of General Education’s Directorate of Open and Distant Education under the Education Broadcasting Services to produce lessons for preschool learners. The review of the curriculum and the production plan have been concluded. The next step is to produce the lessons in English for future translation into seven main local languages. Other activities under his project include radio and television programmes, training of journalists, media bus campaigns and public meetings. To promote child participation, the organisation has expanded its operations from Zambia to east and southern Africa. The Children’s News Agency (CNA), a group of children that does advocacy and awareness raising through the media, has presence in 10 districts of Zambia and is being implemented by other partners in Lesotho, Namibia and South Africa. The children also produce the Junior Reporters magazine from these countries. The organisation is also supporting the Junior Mayor project, to promote the election of children to run as mayors in various districts and cities, in conjunction with the Local Government Association of Zambia (LGAZ). We are also engaging parliament to introduce a child parliament.
How would you define your approach?
Our approach rights based and focused on getting the interventions where the needs are higher. It uses the most access form of communication, the mass media, which reaches more people with the perspective of identifying particular media in a given location. For example, community media work better for rural areas and are used during the media bus campaigns whenever teams are there. The same applies when it comes to sensitising the public using the Zambia National Broadcasting Corporation (ZNBC) Radio One – which is a local language channel of the national broadcaster. For advocacy issues, national English radio and television are relevant, and direct lobbying using children and other CSOs.
Do you cooperate with local authorities and institutions? If yes, how?
The organisation works with the Ministry of Youth, Sport and Child Development to plan and implement activities.
As mentioned above, it is working with the Ministry of General Education to produce the interactive radio instructions for the preschool learners
It is working with the Ministry of Local Government, various districts, traditional authorities and the Local Government Associaiton of Zambia to promote child participation through the Junior Mayors.
Other CSOs specialised in various fields are engaged to disseminate information on their issues according to particular topics through the media.

CCDO in Tanzania – for the eradication of poverty
Scroll to top