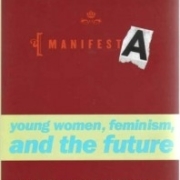 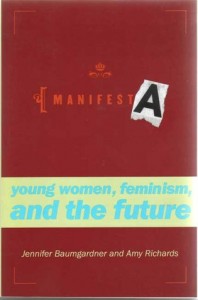 A powerful indictment from within of the current state of feminism, and a passionate call to arms

From Lilith Fair to Buffy the Vampire Slayer to the WNBA–everywhere you look, girl culture is clearly ascendant. Young women live by feminism’s goals, yet feminism itself is undeniably at a crossroads; “girl power” feminists appear to be obsessed with personal empowerment at the expense of politics while political institutions such as Ms. and NOW are so battle weary they’ve lost their ability to speak to a new generation. In Manifesta, Jennifer Baumgardner and Amy Richards show the snags in each feminist hub–from the dissolution of riot grrrls into the likes of the Spice Girls, to older women’s hawking of young girls’ imperiled self-esteem, to the hyped hatred of feminist thorns like Katie Roiphe and Naomi Wolf–and prove that these snags have not, in fact, torn feminism asunder.

In an intelligent and incendiary argument, Baumgardner and Richards address issues instead of feelings and the political as well as the personal. They describe the seven deadly sins the media commits against feminism, provide keys to accessible and urgent activism, discuss why the ERA is still a relevant and crucial political goal, and spell out what a world with equality would look like. They apply Third Wave confidence to Second Wave consciousness, all the while maintaining that the answer to feminism’s problems is still feminism.

I Am Malala: The Story of the Girl Who Stood Up for Education and Was Shot by...