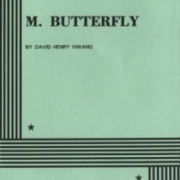 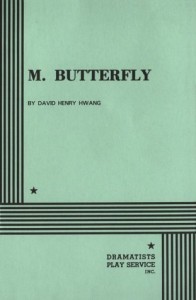 Based on a true story that stunned the world, M. Butterfly opens in the cramped prison cell where diplomat Rene Gallimard is being held captive by the French government – and by his own illusions. In the darkness of his cell he recalls a time when desire seemed to give him wings. A time when Song Liling, the beautiful Chinese diva, touched him with a love as vivid, as seductive – and as elusive – as a butterfly.

How could he have known, then, that his ideal woman was, in fact, a spy for the Chinese government – and a man disguised as a woman? In a series of flashbacks, the diplomat relives the twenty-year affair from the temptation to the seduction, from its consummation to the scandal that ultimately consumed them both. But in the end, there remains only one truth: Whether or not Gallimard’s passion was a flight of fancy, it sparked the most vigorous emotions of his life.

Only in real life could love become so unreal. And only in such a dramatic tour de force do we learn how a fantasy can become a man’s mistress – as well as his jailer. M. Butterfly is one of the most compelling, explosive, and slyly humorous dramas ever to light the Broadway stage, a work of unrivaled brilliance, illuminating the conflict between men and women, the differences between East and West, racial stereotypes – and the shadows we cast around our most cherished illusions.

The Obstacle Race: The Fortunes of Women Painters and Their Work by Germaine...
Scroll to top