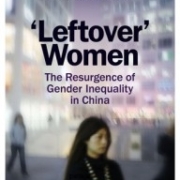 After China’s Communist revolution of 1949, Chairman Mao famously proclaimed that “women hold up half the sky.” In the early years of the People’s Republic, the Communist Party sought to transform gender relations with expansive initiatives such as assigning urban women jobs in the planned economy. Yet those gains are now being eroded in China’s post-socialist era. Contrary to many claims made in the mainstream media, women in China have experienced a dramatic rollback of many rights and gains relative to men. “Leftover Women” debunks the popular myth that women have fared well as a result of post-socialist China’s economic reforms and breakneck growth.

Dear Ijeawele, or a Feminist Manifesto in Fifteen Suggestions by Chimamanda...
Scroll to top