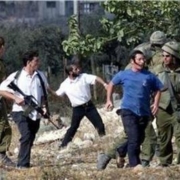 AL-KHALIL, (PIC)– Dozens of Israeli settlers attacked on Saturday Palestinian natives in the Shalala street and the alleys of the Old City of Al-Khalil.

Local sources said that dozens of Israeli settlers stormed Shalala street and the Old City, embarked on beating citizens, and raided and damaged civilian homes under the protection of the Israeli occupation forces which had been largely present in those places.

A number of Israeli settlers spread out in the gold market and the old town, they physically attacked and verbally abused Palestinian natives.

The Israeli soldiers contributed in assaulting, breaking into some houses and terrorizing women and children, while elements of the Temporary International Presence in Hebron watched the incident but did not intervene, the sources added.

Moscheebrand in Berlin
Scroll to top