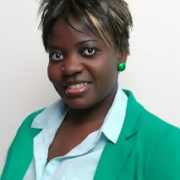 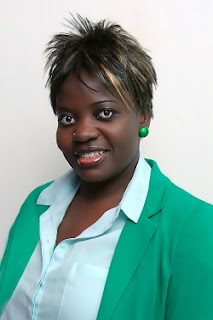 by Milena Rampoldi, ProMosaik, edited by William Hanna. My interview with Idah Nabateregga — FGM Advisor at Terre des Femmes — raises concerns about FGM which denigrates women and girls in all societies around the globe because what damages women, destroys the whole social balance. Female Genital Mutilation prosecutes and harms the victims throughout lives. We wholeheartedly oppose this deleterious “shadow”-ritual and I would like to thank Idah for her support and detailed answers. 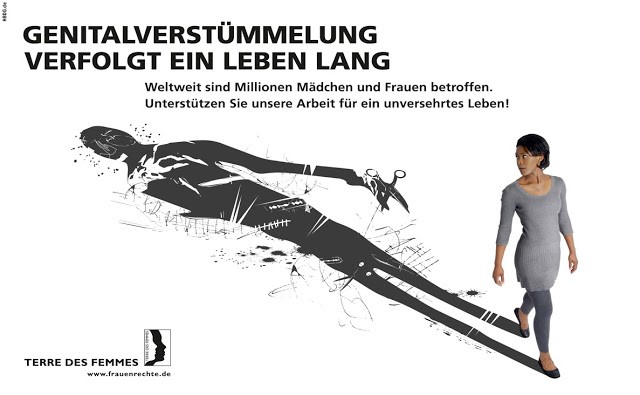 FGM is child abuse and women rights violation whose abolition is urgently necessary!
Milena Rampoldi: What do women rights mean to you?
Idah Nabateregga: Women rights are human rights. They mean equal, self-determined and free life for all women and girls all over the world! At the foundation of the United Nations in 1945, the principle of gender equality was recognised by the community of nations. The General Declaration of Human Rights of 1948 contains the principle of non-discrimination because of gender. 1979 the General Assembly of the United Nations adopted the Convention on the Elimination of All Forms of Discrimination Against Women, CEDAW). Under article 1 discrimination is defined as “… any distinction, exclusion or restriction made on the basis of sex which has the effect or purpose of impairing or nullifying the recognition, enjoyment or exercise by women, irrespective of their marital status, on a basis of equality of men and women, of human rights and fundamental freedoms in the political, economic, social, cultural, civil or any other field.”
MR: What does FGM mean and why must this brutal practice be opposed all over the world?
IN: Female Genital Mutilation (FGM) comprises all procedures pursuing the objective of partially or completely removing or harming female genitals for cultural or other non-therapeutic reasons. There are four forms of FGM:
Type I (clitoridectomy): partial or complete removal of externally visible part of the clitoris and/or the clitoral hood.
Type II (excision): type I and additional removal of the internal labia minora with or without cutting the labia majora.
Type III (infibulation): narrowing of the vaginal opening with the formation of a covering closure, by cutting and sewing one with another the internal and/or external lips of the vulva.
Type IV (other): all other practices like stinging, burning or searing of genitals.
FGM is a fundamental violation of human rights. It is a sensitive matter deeply rooted in the tradition and culture of the respective society. Depending on the community, FGM can be justified in different ways. Sometimes it concerns the safeguarding of virginity and the fidelity towards the husband; improving marriage opportunities for circumcised girls; and hygiene concepts combined with (spiritual) pureness ideals and religious prescriptions are mentioned as arguments for the circumcision. However, the Holy Scripts like Quran and Bible do not mention FGM. The justifications are often based on ignorance about female autonomy and patriarchal structures.
Towards involved people, you should talk about “female circumcision” – the term FGM should stress the severity and irreversibility of the intervention be used for informative purposes.
MR: Why does this practice have to be abolished all over the world?
IN: FGM is a human rights violation against women and children (girls) and frequently concerns minor children (between 0 and 14 years). The decision as to whether or not to circumcise a girl is often taken by the parents. In most of the cases, the intervention occurs without the consent of the child. FGM often causes lifelong physical, mental, and sexual injuries. The direct consequences of FGM include enormous pain and blood loss which could cause a life-threatening shock. If more than one girl is circumcised with the same instrument, additional illnesses and infections like HIV or hepatitis can be transmitted. Frequently, chronic pain and infections and incontinence and sexual disturbances are a durable consequence of genital mutilation. The infibulation can also cause an enormous pain during urination, menstruation and sexual intercourse and represents a very high risk for mother and child during birth. Another possible physical consequence is sterility which in many African regions represents a reason to divorce a woman. In addition, there are psychological problems like traumas, depressions, sleep and eating disorders. Since FGM is often understood as ritual to get an adult woman the girls involved are often victims of premature and forced marriage as well. This makes it difficult to them to go on with their studies to get a good education. For all these reasons, FGM is something we have to struggle against all over the world.

MR: How does the phenomenon look like geographically? How is the situation in Europe?
IN: According to UNICEF estimates, approximately 200 million women are victims of this phenomenon. According to WHO, 3 million of girls per year are victims of FGM. FGM is not only practised in 29 African countries, but also in Arabian and Asian countries. FGM is practised in the countries mentioned above by some ethnic groups. Therefore, the diffusion is not determined by national borders, but according to ethnic groups. FGM is also not limited to the members of a certain religion. In the regions where FGM is traditionally widespread, are Muslims, Christian, partially Jews and members of other religions.

Because of migration, FGM is also increasingly practised in countries in which it did not exist originally, like the European countries (for example Germany, France, Great Britain), the USA, Canada, and Australia. In the EU, more than 500.000 are involved and 180.000 girls and women are endangered. Also in Germany FGM is a problem because by migration more involved people come to the country. Now in Germany there are 35.000 involved and approximately 6000 endangered women (TERRE DES FEMMES 2015).

MR: Why is FGM still a taboo and is not fought enough at the political level?
IN: Today, FGM is not a taboo anymore. It is treated very often. This change depends from awareness-raising measures of different kind. In almost all the countries of diffusion of FGM,  FGM is prohibited by law. Many countries have signed and ratified agreements like the Committee on the Elimination of Discrimination against Women (CEDAW), the Protocol to the African Charter on Human and Peoples’ Rights on the Rights of Women in Africa (Maputo Protocol) and the Istanbul Convention to end FGM. Laws are prevention measures, but do not suffice as the following reasons show:
• Political approaches are often connected with criminalisation. This often causes the secrecy surrounding the practice.
• Some politicians in African countries do not want to deal with the matter because it is part of their culture.
• Other politicians are afraid of losing their election campaign because of FGM.
Therefore, it often happens that many laws against FGM are not implemented even if they were passed.
• Some political approaches like laws or human rights are considered as “Western influence” towards African culture and are therefore criticised.
• Radical movements within the religions mobilise people to engage for the conservation of the practice. This development means a challenge.
• The social and cultural anchoring and the religious interpretation of the practice are in opposition to its official refusal. Legal prohibitions are often just fragmentarily implemented or not applied at all.
For these reasons, laws must be accompanied by national information campaigns and local initiatives. Approaches like information, awareness-raising, dialogue on the direct level of the target groups (for example cultural and religious leaders, women, men), FGM as study theme in integration courses and generation dialogues within communities must be strengthened. Overcoming FGM needs time and long-term engagement on a local, regional, and national level.

MR: Which projects do you implement and which are the best strategies to end FGM according to your experience?
IN: TERRE DES FEMMES has been active for 30 years and besides other main subjects (like violence in the name of honour, forced marriage, domestic and sexualised violence and women trafficking) it fights FGM. Our vision is based on equality, self-determination and freedom for women and girls all over the world. TDF implements different strategies to achieve this goal. The most efficient strategies are the ones in which communities are actively involved in the solution finding and at the same time support community empowerment.
Collaboration with communities: In the projects designed and coordinated by TERRE DES FEMMES CHANGE and CHANGE Plus (www.change-agent.eu), co-financed by the EU, we encourage diaspora communities from countries with a high prevalence rate of the practice to end FGM. The objective is to train and strengthen multiplicators, the so-called CHANGE agents within the involved communities. The CHANGE agents sensitise their own communities by contributing to end FGM. At TDF, we combine our lobby and public relations work with community activities in order to represent the voices of the communities and to develop common strategies for sustainable behaviour changes.