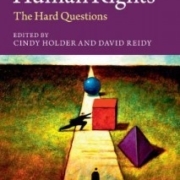 The United Nations General Assembly adopted the Universal Declaration of Human Rights in 1948. A burgeoning human rights movement followed, yielding many treaties and new international institutions and shaping the constitutions and laws of many states. Yet human rights continue to be contested politically and legally and there is substantial philosophical and theoretical debate over their foundations and implications. In this volume distinguished philosophers, political scientists, international lawyers, environmentalists and anthropologists discuss some of the most difficult questions of human rights theory and practice: What do human rights require of the global economy? Does it make sense to secure them by force? What do they require in jus post bello contexts of transitional justice? Is global climate change a human rights issue? Is there a human right to democracy? Does the human rights movement constitute moral progress? For students of political philosophy, human rights, peace studies, and international relations.