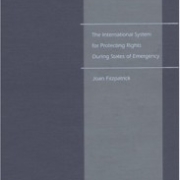 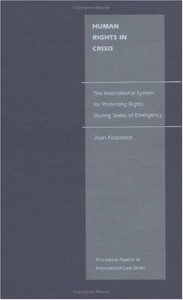 Recent events in South America, central Europe, Africa, and Russia have again brought to the world’s attention the complex interrelationship between states of emergency and the preservation of fundamental human rights. In Human Rights in Crisis, Joan Fitzpatrick offers the first systematic and comprehensive effort to examine the multifaceted system for monitoring human rights abuses under “states of exception.” Unlike previous studies, this book does not focus on substantive norms governing crises, but rather on how those norms might best be implemented.

Building upon her six-year study for the International Law Association, the author confronts the difficulties in defining a coherent concept of emergency, particularly the various forms of de facto emergencies that have been relatively neglected by international monitors. She also profiles and carefully critiques the numerous international bodies that have monitored human rights abuses during states of exception. These bodies include not only the treaty organs of the United Nations, the Council of Europe, and the Organization of American States but also the political organs of the United Nations (especially the Commission on Human Rights), the International Labor Organization, and the emerging structures of the Conference on Security and Cooperation in Europe.