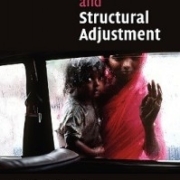 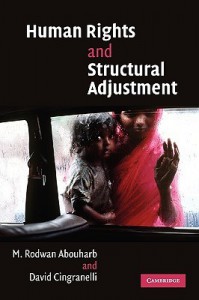 ‘Structural adjustment’ has been a central part of the development strategy for the ‘third world’. Loans made by the World Bank and the IMF have been conditional on developing countries pursuing rapid economic liberalization programmes as it was believed this would strengthen their economies in the long run. M. Rodwan Abouharb and David Cingranelli argue that, conversely, structural adjustment agreements usually cause increased hardship for the poor, greater civil conflict, and more repression of human rights, therefore resulting in a lower rate of economic development. Greater exposure to structural adjustment has increased the prevalence of anti-government protests, riots and rebellion. It has led to less respect for economic and social rights, physical integrity rights, and worker rights, but more respect for democratic rights. Based on these findings, the authors recommend a human rights-based approach to economic development.

A Voice for Human Rights by Mary Robinson
Scroll to top