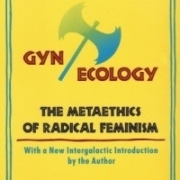 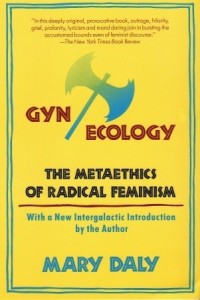 Mary Daly’s New Intergalactic Introduction explores her process as a Crafty Pirate on the Journey of Writing Gyn/Ecology and reveals the autobiographical context of this “Thunderbolt of Rage” that she first hurled against the patriarchs in 1979 and no hurls again in the Re-Surging Movement of Radical Feminism in the Be-Dazzling Nineties.

Theologian/philosopher Daly (The Church & the 2nd Sex, Rev. ’75; Beyond God the Father, ’73) has written “an extremist book…on the edge of a culture that is killing itself.” Conceived as a radical feminist “Voyage” of woman becoming herself, it’s made up of three “Passages.” The 1st denounces the reversals & deceptions (“mind pollution”) of patriarchal disciplines (including “Godfather” theology) & exuberantly sets out to “discover” the true “Croneology” behind that male mystification. The 2nd, “the most somber part of the Journey,” analyzes Goddess-murder (and the murder of the Goddess in every woman) thru the “Sado-Rituals” of five specific historic atrocities: Indian suttee, Chinese footbinding, African genital mutilation, European witchburning, & American gynecology & psychotherapy (gynecology of the mind practiced by the-rapists). Following this “exorcism,” the Voyager moves in the 3rd Passage to the Otherworld of lesbian-feminist Spinsters who successfully scorn patriarchal intimidation (“Spooking”), stir “the fire of female friendship” (“Sparking”), &–after a rip-roaring “Unraveling” gotterdammerung–joyously spin on as Revolting Hags. En route Daly purposefully busts out of some traditional (male) forms & language. Altho the word-work of the “living/verbing writer” sometimes gets in the way/weigh of flashing in-sights, a painstaking indictment of scholarly “erasure” of historic events & some bone-chilling facts of women’s story, Daly’s excursion is bound to inspire Spinsters/Spider Women everywhere & to leave just about everyone else haggard & in-fury-ated.–Kirkus

The Woman’s Encyclopedia of Myths and Secrets by Barbara G. Walker

The Gate to Women’s Country by Sheri S. Tepper
Scroll to top