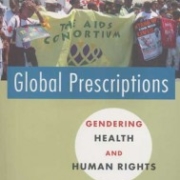 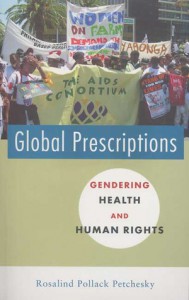 Global Prescriptions is a critical yet optimistic analysis of the role of transnational women‘s groups in setting the agendas for women‘s health in international and national settings. The book reviews a decade of women‘s participation in UN conferences, transnational networks, national advocacy efforts and sexual and reproductive health provision, assessing both their strengths and weaknesses. It critiques the Cairo, Beijing and Copenhagen conference documents and World Bank, WHO and health sector reform policies. It also offers case studies of national-level reform and advocacy efforts and appraises the controversy concerning TRIPS, trade, and essential AIDS drugs. That controversy, Petchesky argues, starkly illuminates the ‘collision course‘ of transnational corporate and global trade agendas with the struggle for gender, racial and regional equity and the human right to health.

The author takes into account the formidable political and ideological forces confronting global justice movements and also offers a sobering reassessment of transnational women‘s NGOs themselves and such problems as ‘NGOization‘, fragmentation and donor-dependency. Petchesky argues that the power of women‘s transnational coalitions is only as great as their organic connection with grassroots social movements.