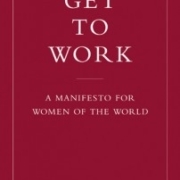 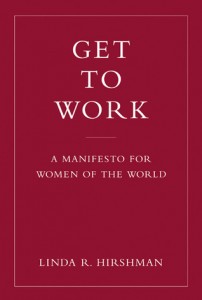 When Linda R. Hirshman published an article called “Homeward Bound” in last December’s American Prospect, she fully intended to reignite the dying embers of feminism’s fire. But the ensuing maelstrom of criticism and applause from national op-ed columnists like David Brooks in The New York Times to mothers—stay-at-home and working mothers alike— surprised even her. Suddenly, the retired professor of philosophy and women’s studies is at the center of an increasingly hot debate on sexual politics. With Get to Work, Hirshman expands her now-infamous call for all women to realize the ideal of economic independence and self-determination.

Examining the trend of affluent, educated women abandoning their careers in order to raise children, Hirshman has concluded that the real glass ceiling that’s barring women from success in the workplace is in their own homes. Why, forty years after The Feminine Mystique, do men and women assign the low-level and generally unrewarding jobs of housekeeping and child rearing to women? The time is ripe for a new feminist revolution based on values and quality of life, not some false promise of “choice.” Get to Work will lead the national discussion as Hirshman lays out a strategic plan to help women rediscover that their place is not necessarily in the kitchen.

Flux: Women on Sex, Work, Love, Kids, and Life in a Half-Changed World by Peggy...
Scroll to top