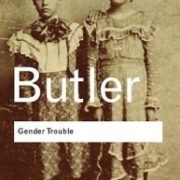 Since its publication in 1990, Gender Trouble has become one of the key works of contemporary feminist theory, and an essential work for anyone interested in the study of gender, queer theory, or the politics of sexuality in culture. This is the text where Judith Butler began to advance the ideas that would go on to take life as “performativity theory,” as well as some of the first articulations of the possibility for subversive gender practices, and she writes in her preface to the 10th anniversary edition released in 1999 that one point of Gender Trouble was “not to prescribe a new gendered way of life […] but to open up the field of possibility for gender […]” Widely taught, and widely debated, Gender Trouble continues to offer a powerful critique of heteronormativity and of the function of gender in the modern world.

This Bridge Called My Back: Writings by Radical Women of Color by Cherríe L....
Scroll to top