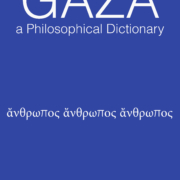 we are very happy today because of this new publication entitled Gaza a Philosophical Dictionary by Michael Buergermeister.

So that you can build up a more precise picture of this work, hereby I would like to introduce you to the interview of our editorial team with the author, Michael Buergermeister. 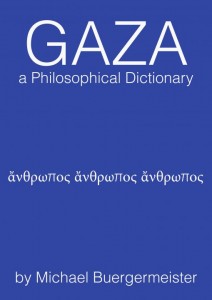 On his website you can find information about the author:

Dr. phil. Milena Rampoldi: What are the objectives of the book?

Michael Buergermeister: The objectives of the book are threefold: firstly: it aims to bare witness to the crimes against humanity being perpetrated against the Palestinians. Naqba-denial should be illegal in the same way that Holocaust-denial is, for much the same reason: Denial of crimes against humanity makes it is easier to commit them. Secondly: the book aims to demystify and debunk. Over decades layer after layer of lies, myths and deliberate misinformation have piled up and still obscure reality. This, one has to emphasize, is a disaster for everyone concerned and makes a realistic analysis, debate and solution impossible. Thirdly the book tries to help people understand the complexities of the conflict.

What makes the conflict complex is the large number of forces in play: Imperialism, Zionism, anti-Semitism, Racism and Corporate Greed. In order to understand what is going on one needs to be aware of the nature of these forces and of the dynamics involved.

My central argument is that it is necessary to fight both anti-Semitism as well as racism within Israel itself simultaneously. By racism in Israel I mean the racism practiced by the Ashkenazi against the Mizrahi as well as the apartheid racism practiced against the Palestinians. One cannot deal with the one without dealing with the other. Another way of saying the same thing is to say: Zionism is a product of anti-Semitism. It is also a beneficiary of anti-Semitism. In order to combat the more extreme excesses of Zionism one must tackle anti-Semitism first.

The book emphasizes the role of imperial and commercial interests in the conflict. Israel is a creation of the British and Americans on the one hand and Nazi Germany on the other. The British facilitated the colonization of Palestine in the 20s, the Nazis, in close collaboration with the Zionists, strengthened the process in the 30s and America created the state of Israel in the 40s.

In addition to this one has to understand that both Israel and America have massive military, industrial, political complexes, which have a direct stake in the continuation of the conflict. The complete control of the mainstream media means that the average Westerner has not only not the slightest idea about what is actually going on but has been brainwashed in highly Orwellian fashion.

What few people realize is that the Ashkenazi, who are the chief creators and beneficiaries of Zionism, actively discriminate against Jews from a Mizrahi background in Israel itself. This is a core part of the problem. In order to maintain their dominance the Ashkenazi keep the country on a war footing while the Mizrahi are willing to accept their subordination on account of the ever present “terrorist threat”. 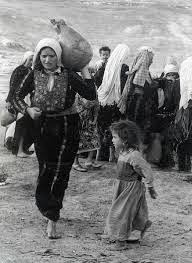 Dr. phil. Milena Rampoldi: How was the book created?

Michael Buergermeister: The process of writing the book seemed to border on a miracle inasmuch as a remarkable set of circumstances allowed it to be created. I happened to be doing research about the Holocaust, I happened to be travelling to Amsterdam, and I happened to be in contact with friends who provided me with vital information at the time I started my research.

I experienced the book as a series of shocks and discoveries. It took me a long time to accept what I had found out to be actually true.

I am a trained historian, and have long been influenced by skepticism so I approached a lot of the information, which eventually ended up in the book, with an awful lot of caution. I have tried to paint a picture that is as accurate and reliable as humanly possible but I do have to emphasize that the book was self-financed and completed within just five months. There are undoubtedly numerous errors, for which I apologize in advance.

Ultimately I regard myself as the midwife rather than the author of this book. The more of my own text I cut away the better it became. It is essentially a collection of quotes.

The book is not an academic text but a series of essays in the tradition of Montaigne and has to be read as such. It is a humanist tract, inspired by Voltaire’s Philosophical Dictionary, and tries to focus on individuals and their stories rather than on any abstract historical, social or political developments. 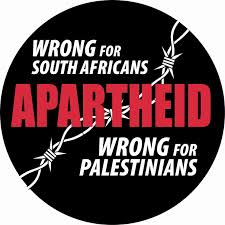 Dr. phil. Milena Rampoldi: What is your message to the Jews?

Michael Buergermeister: Having been brought up as a Catholic by an Irish mother (I regard myself as being Irish) and having studied Judaism I believe that every Christian is a Jew without being aware of the fact. Christianity is simply, to my mind at least, a Jewish heresy and nothing more. I even came very close to converting to Judaism (I was very much in love with a girl from Israel at the time) so I don’t think of myself as being anti-Semitic.

As Gideon Levy has pointed out: Israel is here to stay. The question that now needs to be addressed is: what kind of country should Israel be and above all: Should it be a brutal apartheid state? Is this what both the Diaspora Jews and the Jews in Israel itself really want?

Dr. phil. Milena Rampoldi: What is your message to the Zionists?

Michael Buergermeister: My principle message to the Zionists is that they should read Machiavelli. Machiavelli, when discussing how it was best for one city state to maintain control over another said that, and here I am simplifying, there are, fundamentally, two options: force, which is unreliable or alliance building, which is the more intelligent of the two alternatives. The way forward for Israel is for the Jews to build an alliance with the Palestinians. 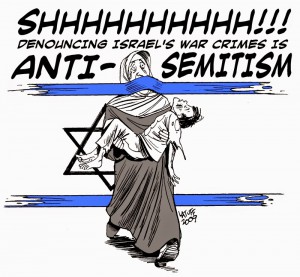 In the same way that apartheid was dismantled in South Africa so apartheid can and should be dismantled in Israel. The argument used to maintain apartheid and justify Israeli crimes against humanity is that Israel faces an existential threat. The truth is however that this has never been the case.

There will be those who say that, on account of my name that I am a Nazi. The opposite is true. Some have asked what my Austrian grandfather did during the war. From what I know about him he was a passionate anti-Nazi (he was a monarchist) who was highly vocal in his opposition to the Nazis. The reason he hated the Nazis was because he’d experienced the horror of the First World War and had hated it.

The only thing that saved him from a concentration camp was the awe and esteem the family enjoyed in Vienna, especially having kept so many of its citizens alive during the Thirties. My grandfather, whose family had had land, was a great believer in Noblesse oblige. The consequence of this largesse was that the family firm nearly went bankrupt but it did keep the family itself out of a concentration camp.

There are those who will undoubtedly say that this book will encourage both terrorism and anti-Semitism. This is nonsense. This book is fiercely opposed to both of these manifestations of human stupidity. It is critical of Israeli policy but it does not strive to eliminate Israel. At the end of the day it is merely a book and Israel has one the most powerful armies in the world.

The Zionists should reflect both on the past and the present and ask themselves whether Zionism, as a dogma, really needs a military, industrial, political complex or whether this complex itself has become a form of cancer.

Einstein believed in “organized cooperation” with the Arabs. He stated, and I quote: “We Jews must show above all that our own history of suffering has given us sufficient understanding and psychological insight to know how to cope with this problem of psychology and organization: the more so as no irreconcilable differences stand in the way of peace between Jews and Arabs in Palestine. Let us therefore above all be on our guard against blind chauvinism of any kind, and let us not imagine that reason and common-sense can be replaced with British bayonets.” What was true of the 1920s holds true today. Einstein realized that a peaceful and permanent presence of Jews in Palestine could only be possible if they worked side by side with Arabs under conditions of social and political equality.

Many forget that the economic boost provided by the Occupation between 1967 and 1973 has turned into an economic burden, which is dragging Israel down and making it expensive to live in.

A couple of Jewish friends of mine wanted to move to Israel but simply couldn’t afford to live there. Many other Jews have moved to Israel and then have moved on to other countries because the racism and xenophobia there simply appalled them. A Zionist has to ask themselves: is this really the Israel they want?

They might or might not like what I write in this book but they would be wrong to dismiss it. What I have attempted to do is hold up a mirror to reality. Some will accept its truth and some will be in denial and get upset. This is perfectly natural. They would be wrong to think however that I am doing this out of a “hatred of Zionism”, “hatred of Israel” or “anti-Semitism”. I have considered converting to Judaism, have considered moving to Israel and regard myself as a friend, albeit a highly critical one, of Israel. 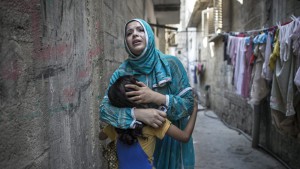 Dr. phil. Milena Rampoldi: What is your message to the world?

Michael Buergermeister: My message to the world is that Christians and especially the Christianchurches have to recognize their responsibility for anti-Semitism. The Christian Churches have to “educate” their flocks about the true nature of Judaism. The appalling racism, apartheid and brutality of the Zionists not only against the Palestinians but also against their fellow Jews needs to be seen in the context of the fear engendered by anti-Semitism. Only once this terrible scourge is eradicated will there be hope of peace in the Middle East.

At the same time the world has to accept the fact that it is directly responsible, especially: Britain, Germany and America, for the creation of this problem. All three countries have perpetuated a terrible injustice upon the Palestinians and all three countries are morally bound to pay them reparations. Only once there is justice for the Palestinians can there be peace in the Middle East. 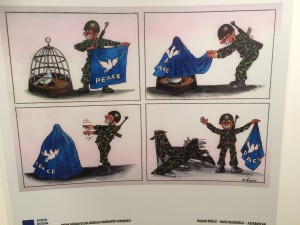 Link to buy the book and support the author’s work: