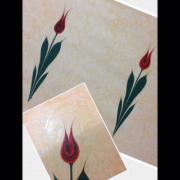 Dear ProMosaik readers, Hello all from Istanbul. In the following we would like to present a brief interview with Alparslan Babaoglu, who is an Ebru and Calligraphy arts master endeavouring to keep alive memories of our forgotten past.

Aygun Uzunlar:  Dear Alparslan Babaoglu, what part does Ebru art have in your life and when and how did you become involved with it?
Alparslan Babaoğlu: I first saw Ebru art at the home of a friend who told me that it had been made by an old herbalist gentleman who lived in Uskudar and who — if he were lost — then Ebru art would also be lost. He showed me a book by Ugur Derman called Ebru in Turkish Art which I found very exciting and took with me thinking that I’ll do this art and won’t let it disappear. I made a vessel according to the book’s instructions; cut paper and built a dest-i seng; bought paints and tragacanth; obtained gall from slaughterhouse and boiled it; and then began doing Ebru art which I have now been doing for 30 years. To be involved with Ebru for so long results in its becoming a very big part of one’s life, as it has for me. I work at, and teach Ebru art in the same way which I took from my master, so that future generations can also receive the same benefits. 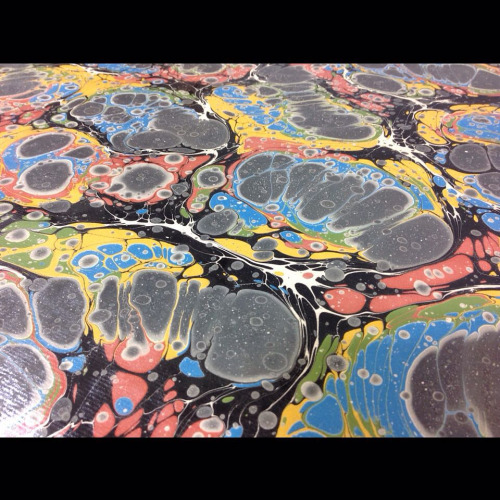 AU: At ProMosaik we found the merging of Ebru and Calligraphy to be positive. By accepting that both arts are Islamic, can we introduce Islam through them to Europeans who are probably unaware of their existence. Have you had any experience in this regard?
AB: Sure.  For me, every Art form can be a useful for bringing about peace and brotherhood while creating a common bond between people from all faiths. I have met and become friends with many people from every country and faith through Ebru. Even though Calligraphy is an art usually identified with Islam, people of all religions have found it attractive because of its graphical features. By the way, I think Ebru is the best example of fatalism thought; of the resigned stand of Muslim people; and a wonderful device for explaining this ways of Islam to non-Muslims. When an Ebru artist is at his vessel, he controls the pattern to a certain extent, but the rest is unexpected. A conscious Ebru artist is aware that he is just part of an experience when he has accomplished a great work. 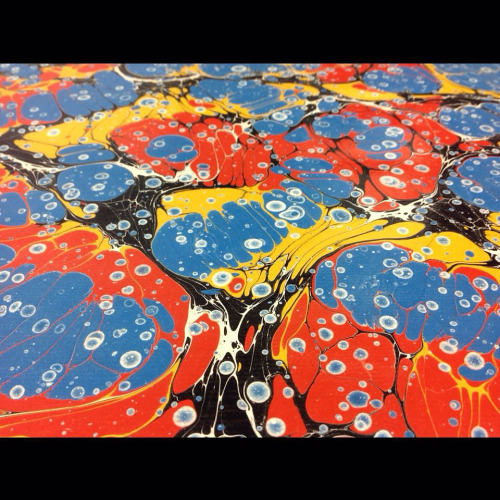 AU: How do you combine Ebru and Hat? What are the main patterns on your works?

AB: My technique, is the technique first used to create Ebru text by Necmeddin Okyay, the master of my master. It involves a paper which already contains Ebru covering part of it, and a second paper on which more Ebru is made. After removing the mould, there are two parts which can be identified as positive and negative. This is called the Akkase Technique. I prepare my mould from great thick letters called Tercihan Celi with preference for dead Hattats texts. After that I paste this mould on a paper which has colourful Ebrus on it. Then I remove the mould and the text looks like it was written by Ebru. In my opinion, both Ebru and Hat appear spectacular this way. 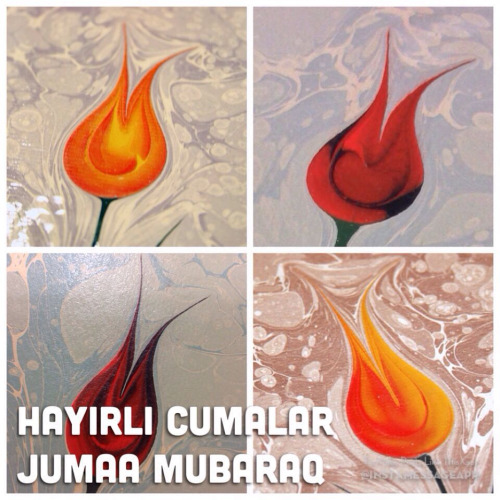 AU: Have you ever given Ebru or Hat lessons abroad?  If so, where? What did you take with you from our country, and what did you experience?
AB: I’m only a practitioner of Hat. I’m not a calligraphist so I have not given any Hat lessons. But I conducted some workshops in Washington DC, Sarijah, and Warsaw. I can say that there is a huge interest in Islamic Arts which is proved by the fact that everyone asked me if I would come back the following year.
AU: Is there any philosophic connection between Islamic Mysticism and Ebru?
AB: In Islamic Mysticism, Ebru is viewed as an example when talking about God’s Will. The Ebru Artist prepares his paints and vessel, decides his brush thickness and amount of water or gall all by himself, these procedures are of artist’s own will. But when he takes the brush and starts hitting with his finger, he can’t decide anything, only God’s Will decides the size of drop and where it falls. 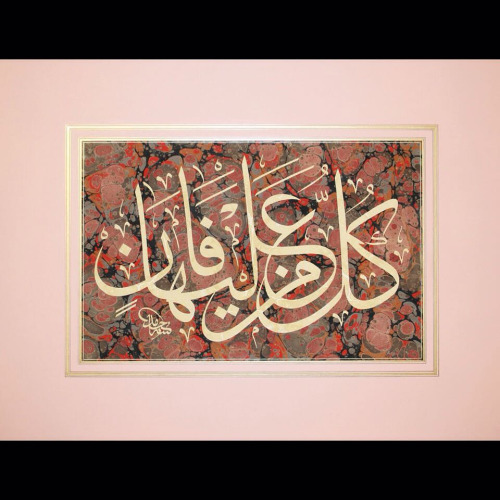