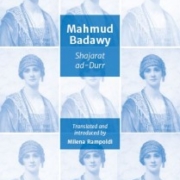 The queen Shajarat ad-Durr is the example of a brave and brilliant woman in the misogynic and androcentric world of the Middle Ages in which she tried to assert herself.

The translator thinks that the Mahmud Badawy’s work is an essential contribution at the intersection of literature, philosophy and history which in her opinion satisfies the ideal of Aristotelian tragedy and at the same time makes an important contribution to both intercultural dialogue and philosophical foundation of Islamic feminism. Hereby a quotation from the Poetics of Aristotle:

“Tragedy is an imitation of an action that is serious, complete, and of a certain magnitude; in language embellished with each kind of artistic ornament, the several kinds being found in separate parts of the play; in the form of action, not of narrative; through pity (eleos) and fear (phobos) effecting the proper purgation of these emotions”.

“I think that the tragedy represents an adequate literary form for political and biographic matters. In it, it is clearly expressed that Muslim women can proudly look back on the past of intelligent and brave women who governed Muslim countries”.

Mahmud Badawy chose to bring on stage the literary form a tragedy, which is really good regarding a life like that of Shajarat ad-Durr, characterised by power struggles, love, betrayal, envy, and at the same time by justice and awareness of her own limits, as expressed in her abdication speech with the Caliph’s Messenger.

Without anticipating the content of the five acts of the tragedy here in the following we would like to quote a short passage of the scene in which the Caliph’s letter is read:

Caliph’s messenger:  (Opens the letter and reads) In the name of Allah the Most Gracious the Most Merciful, and we ask help from Him. This is from Abu Ahmed Abdullah Al-Mustasim-Billah bin Al-Mustansir-Billah, the Abbasid prince of believers in Baghdad, to the princes and ministries of Egypt, and especially its people. Peace and mercy of Allah be upon you.

Many voices: Peace and mercy and blessings of Allah be upon you.

Caliph’s messenger: We heard the news of your gaining victory over the enemy of Islamic religion; therefore, we praised Allah Who honoured His religion by you and relieved Egypt from the hands of our enemies. However, messengers came to us with news includes that you entrusted your affairs to Shajarat Ad-Dur, the widow of King Al-Salih, may Allah mercy him. Whereupon, as long as giving women kingship’s affairs is unprecedented act in Islam, we felt sad for this. Moreover, as long as it is the right of Muslims to appoint for them someone qualified for the burdens of authority, we would like to ask you. If you no longer have men valid for taking the authority, we may send for you someone valid for it. The Messenger of Allah (prayers and peace of Allah be upon him) said: “There will be no success for the people who entrust their affairs to a woman.” And peace be upon who follows the right path.

In this context, the Caliph made reference to the tradition of the Prophet (sas) according to which a people governed by a woman will never succeed. This tradition is considered the principal source of exclusion of Muslim women from the world of politics and the governance of a Muslim State. However, today not only feminists but also male scholars of Islam doubt about the general validity of this hadith. As example I would like to mention the Turkish Islamic scholar Prof. Mehmet Azimli (compare the following article: Kadınların idareciliği konusundaki rivayete tarihsel bağlamda eleştirel bir yaklaşım, online version: http://www.mehmetazimli.com/bildiriler/c1.pdf).

A limited interpretation of the tradition of the Prophet (sas) who in reality made reference to a historical event happened to the Persian king Chosrau II who had nominated his daughter as his successor. In this context, the Prophet (sas) had expressed his concrete opinion which cannot be extended to the whole world of Islamic politics by an androcentric interpretation totally excluding women from political leadership.

Shajarat ad-Durr’s clever political move after her abdication consisted in the alliance with the powerful slave Aybek who became Sultan of Egypt on her initiative and next to whom she could continue to rule. But he betrayed her, and was killed.

If you would like to help the work of the association ProMosaik, you can purchase a copy of the book, by following this link:

Thanks a lot in advance for your kind support