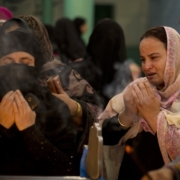 On a new English translation of the essay by Prof. Abdulhamid al-Ansari

“The Political Rights of Women in Islam” is a provocative essay written by Prof.  Abdulhamid al-Ansari, former Dean of the Faculty of Islamic Law at the University of Qatar about political rights of women in Islam. Using this work, I would like to show the relation between politics and Muslim women from an interpretive and open perspective.

In the introduction to our presentation of Prof. al-Ansari’s essay, I mention a relevant aphorism by the French author of the “Petit Prince,” Antoine de Saint-Exupery who says:

With this adaptation of the aphorism to women in general, and Muslim women in particular, I would like to negatively show how the unrights of women existing in today’s Muslim societies are not Islamic at all even if, without contradicting myself, I would like to involve in this discussion also scholars who exclude women from Muslim politics.

They are part of a tradition of exclusion and segregation which started in Muslim history to ban women from social and political activism, and to simultaneously make them disappear from social and political life. I would like to name this tradition of exclusion as a folklore forced on women in history by making them believe that this is the true message of Islam. The true message of Islam is not female submission to a male-dominated world, but the submission of both men and women to Allah, the Creator of the world, and as it says in the Quran, the Creator of the Heavens and the Earth.

Why is al-Ansari’s essay so important for us as politically engaged Muslim women? This is the first question I asked myself when I wrote to the author to get his permission to publish this essential essay about women and politics.

In his essay, Prof. al-Ansari presents three different views on the participation of women in politics and society: from the total exclusion of women from politics by ultra-traditional Muslims, who state that if a woman is not responsible for the financial matters in the household, she cannot rule a State, to a partial and an almost complete participation of Muslim women in political and social life in an Islamic state.

The research method of Prof. Al-Ansari is rational and scriptural, because he introduces different deductions made by Muslim scholars in history starting from exactly the same sources — which for all Muslims are the Holy Book of the Quran and the tradition of the Prophet, called Sunnah. By reading Prof Al-Ansari’s essay, in the end I came to the conclusio, that this presentation of these different approaches teaches us not to judge internal differences in Muslim scholar community, but to reconsider the importance of “ikhtilaf” according to what the Jewish Austrian convert Muhammad Asad says when he mentions the following Quranic verse 5:48:

And We have revealed to you, [O Muhammad], the Book in truth, confirming that which preceded it of the Scripture and as a criterion over it. So judge between them by what Allah has revealed and do not follow their inclinations away from what has come to you of the truth. To each of you We prescribed a law and a method. Had Allah willed, He would have made you one nation [united in religion], but [He intended] to test you in what He has given you; so race to [all that is] good. To Allah is your return all together, and He will [then] inform you concerning that over which you used to differ.

My personal opinion about ikhtilaf is the following: if in our political action we do not start to rediscover this “minhaj,” i.e. this open path of Islam and its creative, interpretive movement within the Islamic doctrine, we will lose the central them of original and authentic Islam. And this open-minded approach means also the acceptance of very narrow-minded opinions which are part of Islam, even when they are not our own positions or preferred approach as Muslim feminists.

I am convinced that the three views Prof. Al-Ansari presents in his essay to show the main opinions about female participation to Islamic politics essentially represent the entire Muslim community and that this rational division of approaches can help to improve the dialogue between these three different groups if they learn to respect one another and start understanding that all three points of view are respectable within Islam, but must not be forced on anybody in the whole Muslim ummah. The definitive truth will be revealed by Allah when we will return to Him all together in the end, as the final sentence of Quran verse 5:48 suggests.

If we approach the matter using the methods of Enlightment Philosophy (which has strong methodical similarities with the German “Aufklärung”), based on rational research and enquiry, I am convinced we will be able to achieve a positive dialogue within Islam concerning political women’s rights and/or unrights. According to the Quranic Verse 5:48, Islam is a religion which supports diversity, and open-minded discussion about all religious, social and political matters. So we have not to judge the others’ opinion if it is different from ours, but didactically discuss it. This rational approach is the contribution Islam can make to dialogue and acceptance of diversity today, to leave the culture of hatred as Prof. al-Ansari calls it, in order to achieve a world made of justice, dignity, respect, empathy, and in particular of peace.

Political rights of women are an important aspect of this peaceful and just world, accepting diversity: and diversity means gender, cultural, social, and political diversity.

The association I work for, ProMosaik e.V.,  stands for the message of a colourful world made of tolerance which is also the core message of Islam if we understand it properly. And gender justice is part of this correct interpretation of Islam according to Quran and Sunnah. But, from my point of view — as contradictory as this may sound — people standing for the exclusion of women from politics should be also involved in the debate about female participation in Islamic politics, because without them we will never be able to understand their diversity. Without talking to them, we will also never have to change to make them understand our approach. Prof. Al-Ansari shows us the way by stressing on the importance of talking and introducing opinions, without judging them, or putting them down as being in arrears. If the three positions do not start working together for the progress of the Muslim world, there will never be a constructive change and improvement of Islamic politics.

And to achieve positive results in Muslim politics, women’s contributions are urgently needed. In conclusion I would like to mention a quotation by Benazir Bhutto who, day by day, gives me the force to go on fighting for female participation in Islamic politics:

It is the tradition of Islam that has allowed me to battle for political and human rights, and this same tradition strengthens me today.

If you are interested in reading the book you can find it on Amazon here.