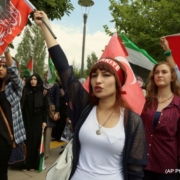 An introduction to a MyMPN series on Dr. Bahriye Üçok’s “Female Sovereigns in Islamic States,” now available in English.

For me personally, the history of ruling women in Muslim history is a history of silence, exclusion, segregation and oblivion. Women strongly participated in Muslim politics and social affairs in the first generations after the Prophet Muhammad’s era. Then, step by step, the androcentric interpretations of Quran and Sunnah put women aside and caused their progressive horizontal segregation by prohibiting them from participation in the social and political life of the Ummah.

For Islamic feminism today, it is of central importance to stress the participation of women in Muslim history, and to show the insurmountable obstacles they had to shoulder to fight for their difficult and proscribed political career in male-dominated societies. To rediscover socio-political female power in Muslim societies today, it is essential to read books like “İslam Devletinde Kadın Hükümdarlar.”

It was written by Dr. Bahriye Üçok, a Turkish historian, Islam expert and feminist in 1965, as PhD thesis at the University of Ankara — where she also taught for years until her untimely in 1990 death by parcel bomb at her house.

Her work seemed doomed to oblivion. Then Aygun Uzunlar, the Turkish coordinator of the German intercultural and interreligious association ProMosaik e.V., visited Miss Kumru Üçok, her daughter, in exactly the same house in Ankara where the parcel bomb exploded so many years ago. She gave him the permission to publish her mother’s book in English, German and Italian.

With this first English publication, ProMosaik wants to contribute to the gender dialogue in Islam and to an interreligious dialogue that promotes justice and peace. In order to reaffirm the importance of female political participation in our time, we must rediscover these forgotten books about Muslim rulers in history.

I am firmly convinced that gender justice and equity, as I have already shown on the basis of Prof. al-Ansari’s essay about political rights of women in Islam and in my translation of Mahmud Badawi’s tragedy about the ruler Shajarat ad-Durr in Medieval Egypt, is a vitally important aspect of a world dedicate to diversity, justice and tolerance. For me, Islamic feminism essentially shows us the path to an authentic gender justice which distinguishes itself from the gender leveling practiced in Western feminism. Anyone who fights for gender leveling instead of for an equity that respects differences misses the point: man and woman are both different and complementary, even if they are equal.

What’s great in Dr. Üçok’s book is her historical approach to the matter of women and their political participation in Islam. It is essential to start integrating different methods in Islamic feminism, without limitation ourselves to the interpretation of Islamic sources that often underestimate the importance of dynamic historical analysis and the study of individual rulers.

If we go back to history and analyse ruling women’s lives, careers, and personalities, we start understanding that women also participated in politics in Muslim countries and were successful. We understand how they fought for their careers, how they schemed, how they used “Realpolitik” strategies to wield power. Starting from this historical reality, we can see how Islam originally granted extended political rights to women. Apart from this, we can also see the historical dialectics between Islamic utopia and a Muslim political reality made of thirst for conquest, domination and power.

In a positive sense, we should try to return to Islamic political utopia by returning the rights of political participation to women in Muslim countries today to empower them to overcome their segregation and exclusion. The so-called horizontal segregation of women and their total exclusion from political life were justified religiously by manipulating and generalizing sources like the following hadith of the Prophet Muhammad:

“Never will succeed such a nation as lets their affairs carried out by a woman.”

In my opinion, to understand this hadith properly, it has to be inserted into the historical situation in which it was said. The Prophet informed people that the Sassanid State, which was ruled by a woman, would fall after a short while. As a matter of fact, it fell after a short while. But from this historical fact you cannot deduct a general exclusion of all women from political life in Islam.

An important proof for my thesis is given by the positive way in which Balqis, the Queen of Sheba, is mentioned in the Quran. The Quranic description of Balqis, who for me represents the first Islamic ruler in an etymologic sense, makes us clearly understand that the hadith of the Prophet mentioned above regarding the issue of political, female participation was not intended as a general judgment.

Therefore, there is not a definite and binding verse or hadith that prohibits a woman from working for the public, and as a consequence from ruling a Muslim State. At this point I would like to remember what Benazir Bhutto said when she affirmed that it is exactly the Islamic tradition which strengthens her today in her fight for women’s rights in Muslim politics.

The androcentric point that demands total exclusion of women from Islamic politics, which has succeeded for centuries, starts from two very daring conclusions I would like to refute. As we’ve already seen, according to this tradition, women should not be allowed to govern because their governance means that empires “will never” prosper.

However, there is an additional interpretation relating to the exclusion of women based on Quran, Sunnah and the consensus of Muslim scholars on Quranic verse 4:34. This verse does not even relate to politics but to the relationship between genders in marriage, in which only the husband must financially support the family.

“Men are in charge of women by [right of] what Allah has given one over the other and what they spend [for maintenance] from their wealth. So righteous women are devoutly obedient, guarding in [the husband’s] absence what Allah would have them guard. But those [wives] from whom you fear arrogance – [first] advise them; [then if they persist], forsake them in bed; and [finally], strike them. But if they obey you [once more], seek no means against them. Indeed, Allah is ever Exalted and Grand.”

From the housewife who has to guard the husband’s property during his absence and to listen to him because he is financially in charge of her, many traditional scholars monistically deduct the un-political woman, who is not allowed to participate in politics and society, by completely ignoring female participation in politics in history.

These scholars even go a step further by affirming that female rule is even haram, i.e. forbidden by Sharia law, although a general prohibition of female participation in Islamic politics is not affirmed at all, neither in the Quran nor in the Sunnah. However, they take another step by affirming that “women do not have the intellectual and personal skills required by a ruler.” This, of course, cannot be true because it is contrary to Quran 4:1 saying: “O mankind, fear your Lord, who created you from one soul and created from it its mate and dispersed from both of them many men and women,” thereby affirming the gender equity on a creational level.

In opposition to all those interpretations which are contrary to authentic sources of Islam, let us in addition have a look at Muslim history: let us read the stories written by this Turkish author about women ruling in Muslim States from India to Egypt, from Bhopal to Salgur, from Acheen to Kutluk, to quote a couple of examples.

Let us understand Islam as a religion based on gender equity, by discovering the biographies and political struggles of women in Islamic countries, women who had to fight in a misogynist environment. What ProMosaik considers the great contribution made by Dr. Üçok is this: her historical analysis of the countries and cultural environments, conditions and methods according to which women ruled states during Muslim history.

In this series of articles, we will introduce the biographies of all women the author alludes to in her precious book.

If you are interested in reading the book you can find it on Amazon here.