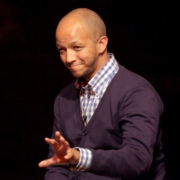 Below is my interview with Sami Omar on migration and integration. He was born of Eritrean parents in Sudan in 1978 and grew up as a child of German parents in Swabian city, Ulm. He works and writes on migration and integration for print and online media. In 2016 his second literary work “I’m OK, thanks” was published. Sami Omar is a conferencier doing his crowd-pulling stage programs throughout Germany. See more about him on sami-omar.de

What does racism and discrimination mean to you?

To make friends from the start of this interview, I’ll say they don’t go together. I’d rather keep these terms separate.

Racism comes in many forms and is justified by all sorts of theories. However, those promoting these theories always aim to assign values to the different characteristics that people have in order to humiliate others and overvalue themselves. Discrimination is the behavior that follows from this ideology. Someone is treated worse because of his actual or contrived differences and the assumption that they are worth less than one’s own.
Accordingly, the perception of distinctive human characteristics by racists always has a goal. Often they describe noticing these differences as natural, something a child might do out of pure curiosity when seeing differences such as skin color or hair texture. They therefore deny that children only notice these differences without placing values on them — if they are not affected by ideology. Racists, on the other hand, use them to depreciate others.
ProMosaik believes that dialogue and learning is the best strategy to bridge racism and discrimination. What’s your opinion?

I certainly should not have to explain here what is good about exchanges and getting to know each other. But perhaps I can make a new breakthrough by discussing a type of learning that goes beyond the multicultural festivals of the nineties, which still exist today. On such occasions people of different ethnicities and cultures are sometimes put on exhibit. It’s emphasized that you can meet the foreigner, the exotic person. You can hear Native drumming or sit in a real teepee. In short, you can satisfy your curiosity. I am for the next step – for an exchange between equals. The first step should be to recognize the equality of the other, and then to look at the differences. Why? Because curiosity wants only satisfaction. Interest arises when there is an exchange among equals, and this requires recognition of equivalent worth.

How can art, theater and stage work generally contribute to tolerance?

By awakening this interest, we are encouraged to think. Don’t offer fast food. Instead, give cooking lessons.

What experiences do you personally face in your life with discrimination?

Please forgive me, but I don’t feel like going there! This is not  a posture — I really don’t want to. Sometimes even talking about discrimination wears me out. Be assured: I run into it more often than I want to see it for myself. I try to speak honestly with myself in my texts so that these violations, the exclusion and hatred, become visible. It’s not my goal merely to expose them, but you cannot describe a life without wounds, and the life I tell about in my stories, the scars on the characters are, in a way, also my own.

Islam is often given an ethnic form…. Even people who are not Muslims are discriminated against as Muslims because of their “ethnic” characteristics. How can we confront this?

I am convinced that nationality and ethnicity are fictitious categories. Borders are drawn by humans and humans are researched by humans. The resulting categories and parameters give rise to the possibility of assigning a value, which serves to legitimize exploitation, and this in turn serves to create value (… therefore it has to be preserved). For examples you do not have to look among the stupid. Racism is not a problem caused by inferior intellect. [The philosopher] Immanuel Kant is quoted as saying:

“Humanity exists in its greatest perfection in the white race. The yellow Indians have a smaller amount of talent. The Negroes are lower and the lowest are a part of the [Indigenous] American peoples.”

As far as islamophobia is concerned, it is basically similar. In the discussion about religions, ethnicity and nationality should play no role — unless someone finds it useful!

API CHAYA – struggling against domestic violence and sexual assaults against...

Peace Tree – for coexistence and peace in Kenya
Scroll to top