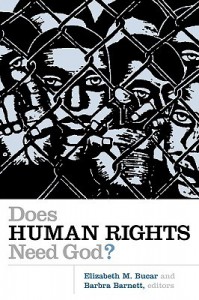 When the Universal Declaration of Human Rights was drafted in 1945, French Catholic philosopher Jacques Maritain observed, “We agree on these rights, providing we are not asked why. With the ‘why,’ the dispute begins.” The world since then has continued to agree to disagree, fearing that an open discussion of the divergent rationales for human rights would undermine the consensus of the Declaration. Is it possible, however, that current failures to protect human rights may stem from this tacit agreement to avoid addressing the underpinnings of human rights?

This consequential volume presents leading scholars, activists, and officials from four continents who dare to discuss the “why” behind human rights. Appraising the current situation from diverse religious perspectives — Jewish, Protestant, Orthodox, Muslim, Confucian, and secular humanist — the contributors openly address the question whether God is a necessary part of human rights. Despite their widely varying commitments and approaches, the authors affirm that an investigation into the “why” of human rights need not devolve into irreconcilable conflict.