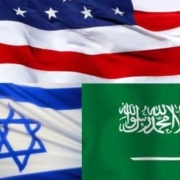 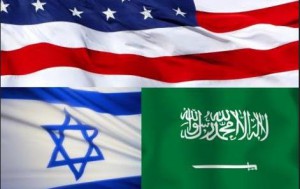 “ . . . In the councils of government, we must guard against the acquisition of unwarranted influence, whether sought or unsought, by the military-industrial complex. The potential for the disastrous rise of misplaced power exists and will persist. We must never let the weight of this combination endanger our liberties or democratic processes. We should take nothing for granted. Only an alert and knowledgeable citizenry can compel the proper meshing of the huge industrial and military machinery of defense with our peaceful methods and goals, so that security and liberty may prosper together.” — A warning from President Eisenhower’s Farewell Address to the Nation January 17, 1961.

Unfortunately for humanity the U.S. citizenry was neither alert nor knowledgeable so that within a few decades Eisenhower’s worst fear became a reality and today — apart from the citizenry having been transformed into a mass of duped subjects — a vast Political Corporate Military Industrial Empire dictates U.S. hegemonic foreign policy and military adventures that are supposedly keeping the world safe from terrorist states apart from Israel which qualifies for special Holocaust dispensation. This ravenous for profit and “to hell with morality” Empire is dependent on continuous military conflicts that also serve as a distraction from the iniquities of a world where almost half of the world’s wealth belongs to just one percent of the population(1); where some twelve million children under the age of five die annually from acute respiratory infections, diarrhoea, measles, malaria, and malnutrition; and where the U.S. threat to all humanity is furthered by its partners in crime Israel and Saudi Arabia who both share the common interest of wanting a destabilised Middle East.

Saudi Arabia’s regional mischief is designed to retain the House of Saud royal family’s complete control over the nation’s oil wealth and people. This secretive dynasty, consisting of thousands of descendants of Muhammad bin Saud and his brothers and the current ruling faction of descendants of Abdulaziz bin Abdul Rahman Al Saud, enjoys the power of an absolute monarchy with no political parties or national elections. Any challenging political activity or dissent is severely dealt with by a judicial system that lacks jury trials and observes few human rights formalities. Those arrested — usually not given a reason or access to a lawyer — are then subjected to abuse and torture that lasts until a confession is extracted. The freedom of thought and action for Saudis is further restricted by the attentions of the religious police whose warped sense of morality often intrudes on citizen privacy and crosses the bounds of sanity. The idea of an “Arab Spring” in neighbouring countries is therefore an anathema for the Saudi rulers who have taken steps to ensure the contagion of freedom does not cross over into Saudi territory.

Consequently Saudi Arabia is causes chaos and bloodshed in Middle Eastern and North African countries by providing Millions-of-dollars-worth of armaments to Al-Qaeda and other Takfiri networks — Muslims accusing other Muslims of apostasy — that are destabilizing and destroying once proud civilizations in Iraq, Lebanon, Libya, and Syria by fomenting sectarian unrest. By serving its own interests, Saudi Arabia is also unwittingly helping to fulfil Israel’s desire for political instability and chaos (divide and conquer) in the predominantly Muslim countries that surround it. Furthermore, Israel’s existence as a state serves to have Gulf state Arab populations focus on Israel as the enemy rather than their own autocratic monarchies who are not legally bound or restricted by a constitution.

Saudi Arabia’s motive for interference in Syria for example, is its desire to neutralize Iran’s regional influence. All the talk about supporting democracy in Syria is just a political pantomime with the actual objective being the installation in Damascus of a regime subservient to Saudi Arabia — which in turn means subservient and subject to the geopolitical control of the U.S., Israel, and tag-along allies who constitute the imperialist hostile thrust against Iran. Britain, France, and the U.S. have in the meantime continued to diligently claim that they are supporting “a pro-democracy uprising” in Syria which of course is to be expected from noble honest-to-goodness proponents of freedom and human rights. That claim, however, is nothing but a Western criminal conspiracy that also happens to satisfy the feudal-style Gulf state dictators who are cherished for their oil.

While all this chicanery is playing out, the Israelis are as usual orchestrating the involvement of its Western stooges — led by a subservient U.S. — in Middle Eastern conflicts so that while many of its Arab neighbours exist under political instability and chaos, “God’s chosen People” can concentrate on the ethnic cleansing of Palestinians by nuking the hell out of them with bombs and missiles generously paid for by seriously deluded U.S. taxpayers. In the meantime, the Anglo-Zionist Political Corporate Military Industrial Emperors will sit back happily, rubbing their grubby, bloodstained hands while frenetically counting the shekels. It is now imperative — before Israel’s obsessive insanity drags us all into an Armageddon  — that Europeans vehemently impress on their political leaders that Europe is no longer prepared to blindly follow the criminal warmongering adventures of an AIPAC(2) controlled United States of America.

Back in 1796 President George Washington, in his Farewell Address to the Nation, warned with uncanny accuracy against the dangers of foreign influence that acquires favoured status for one nation while excluding others whose inevitable reaction is one of resentment.

“ . . . So likewise, a passionate attachment of one nation for another produces a variety of evils. Sympathy for the favorite nation, facilitating the illusion of an imaginary common interest in cases where no real common interest exists, and infusing into one the enmities of the other, betrays the former into a participation in the quarrels and wars of the latter without adequate inducement or justification. It leads also to concessions to the favorite nation of privileges denied to others which is apt doubly to injure the nation making the concessions; by unnecessarily parting with what ought to have been retained, and by exciting jealousy, ill-will, and a disposition to retaliate, in the parties from whom equal privileges are withheld. And it gives to ambitious, corrupted, or deluded citizens (who devote themselves to the favorite nation), facility to betray or sacrifice the interests of their own country, without odium, sometimes even with popularity; gilding, with the appearances of a virtuous sense of obligation, a commendable deference for public opinion, or a laudable zeal for public good, the base or foolish compliances of ambition, corruption, or infatuation.

“As avenues to foreign influence in innumerable ways, such attachments are particularly alarming to the truly enlightened and independent patriot. How many opportunities do they afford to tamper with domestic factions, to practice the arts of seduction, to mislead public opinion, to influence or awe the public councils. Such an attachment of a small or weak towards a great and powerful nation dooms the former to be the satellite of the latter.

“Against the insidious wiles of foreign influence (I conjure you to believe me, fellow-citizens) the jealousy of a free people ought to be constantly awake, since history and experience prove that foreign influence is one of the most baneful foes of republican government. But that jealousy to be useful must be impartial; else it becomes the instrument of the very influence to be avoided, instead of a defense against it. Excessive partiality for one foreign nation and excessive dislike of another cause those whom they actuate to see danger only on one side, and serve to veil and even second the arts of influence on the other. Real patriots who may resist the intrigues of the favorite are liable to become suspected and odious, while its tools and dupes usurp the applause and confidence of the people, to surrender their interests.”