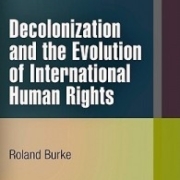 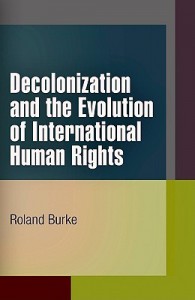 In the decades following the triumphant proclamation of the Universal Declaration of Human Rights in 1948, the UN General Assembly was transformed by the arrival of newly independent states from Asia, Africa, and the Middle East. This diverse constellation of states introduced new ideas, methods, and priorities to the human rights program. Their influence was magnified by the highly effective nature of Asian, Arab, and African diplomacy in the UN human rights bodies and the sheer numerical superiority of the so-called Afro-Asian bloc. Owing to the nature of General Assembly procedure, the Third World states dominated the human rights agenda, and enthusiastic support for universal human rights was replaced by decades of authoritarianism and an increasingly strident rejection of the ideas laid out in the Universal Declaration.

In Decolonization and the Evolution of International Human Rights, Roland Burke explores the changing impact of decolonization on the UN human rights program. By recovering the contributions of those Asian, African, and Arab voices that joined the global rights debate, Burke demonstrates the central importance of Third World influence across the most pivotal battles in the United Nations, from those that secured the principle of universality, to the passage of the first binding human rights treaties, to the flawed but radical step of studying individual pleas for help. The very presence of so many independent voices from outside the West, and the often defensive nature of Western interventions, complicates the common presumption that the postwar human rights project was driven by Europe and the United States. Drawing on UN transcripts, archives, and the personal papers of key historical actors, this book challenges the notion that the international rights order was imposed on an unwilling and marginalized Third World. Far from being excluded, Asian, African, and Middle Eastern diplomats were powerful agents in both advancing and later obstructing the promotion of human rights.